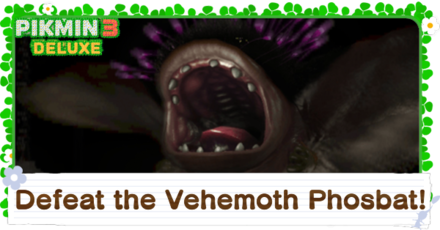 This is a story walkthrough for Defeat the Vehemoth Phosbat! in Pikmin 3 Deluxe for the Nintendo Switch. This guide will cover defeating the Vehemoth Phosbat, the boss of the Distant Tundra, as well as saving Captain Charlie. Read on for more tips and strategy!

1: Carry the northeast and western fragments

First, you'll want to walk over the glowcaps along the ground to have them light up, which can protect you from the enemies here. Head to the two places shown in the maps above to gather up all of the bridge fragments, which are located to both the northeast and west parts of the cave. There is a large crystal in front of the northeastern fragments, so bring some rock Pikmin along to break it.

2: Light up the small lightbulb while carrying the fragments 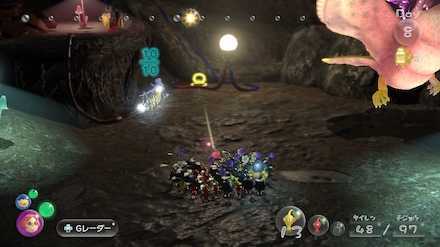 Take the opportunity to turn on the small lightbulb while your Pikmin are carrying the bridge fragments. If you take a look at the map, you'll notice there are 4 electrodes that aren't connected to their lightbulbs, so bring some yellow Pikmin over two of them and light them up.

When you light them up, the Vehemoth Phosbat will fall down, giving you an opportunity to have your Pikmin charge at it and deplete its health.

3: Light up the large lightbulb

Once your Pikmin finish carrying all the fragments, a bridge will be built in the center of the map. Cross over the newly formed bridge, then throw 20 yellow Pikmin at the large lightbulb electrode here to get it running. Turning on this lightbulb will severely weaken the Vehemoth Phosbat, giving you a chance to deal a ton of damage. 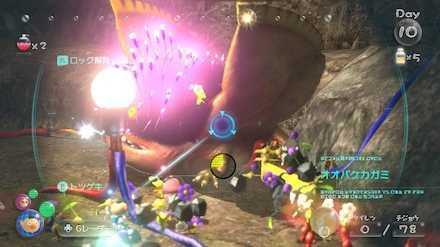 Lighting up this lightbulb will cause the Vehemoth Phosbat to lose a ton of its power. However, you still need to watch out for its sucking attack, as well as its poison one. If any of your Pikmin do get sucked up or poisoned, simply whistle for them to calm them down.

Attack from behind when it falls 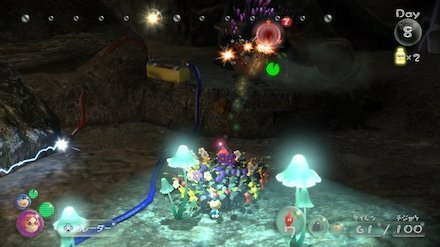 The Vehemoth Phosbat will fall down when lightbulbs are lit up. Take this as an opportunity to charge your Pikmin at it each time. If you can land several Red Pikmin on its head, you can deal a ton of damage. 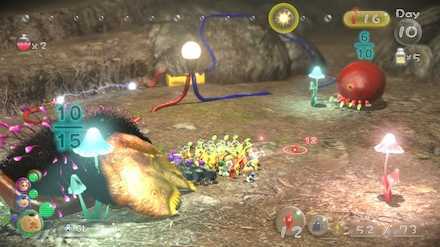 After defeating the Vehemoth Phosbat, you'll be able to get a Heroine's Tear. Use your pikmin to bring both the fruit and Vehemoth Phosbat remains back to the SS Drake. Using the shortcut created earlier, this should be a rather quick trip.

Reunite with the Captain 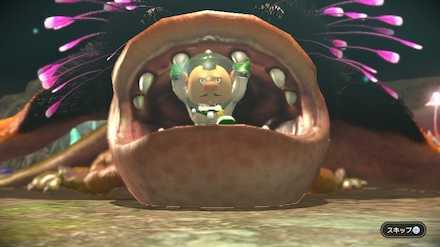 Defeating the Vehemoth Phosbat also allows you to finally reunite with Captain Charlie. This means you'll be able to control up to three leaders at a time, but for now, just worry about recovering all the enemy spoils.

Post (0 Comments)
Opinions about an article or post go here.
Opinions about an article or post
We at Game8 thank you for your support.
In order for us to make the best articles possible, share your corrections, opinions, and thoughts about "Defeat the Vehemoth Phosbat! Walkthrough" with us!
When reporting a problem, please be as specific as possible in providing details such as what conditions the problem occurred under and what kind of effects it had.