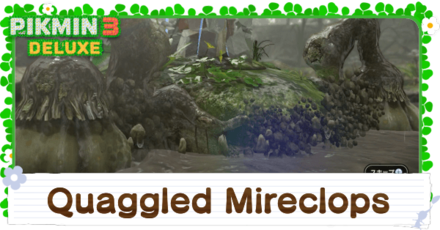 This video shows one method of defeating the Quaggled Mireclops with 0 Pikmin deaths!

These steps are the premise of battling with the Quaggled Mireclops, the boss of the Garden of Hope. Defeating it will allow you to save Louie (again) and net you a Wayward Moon.

Rock pikmin are essentially for this battle, so make sure to bring about 20 to 25. You'll also want to bring a large amount of blue or winged pikmin (around 40-60). Red and yellow pikmin can be killed easily by the puddles in this battle, so its best to leave them behind. Having plenty of ultra-spicy spray will also make this battle considerably easier.

Split your group into blue pikmin and rock pikmin 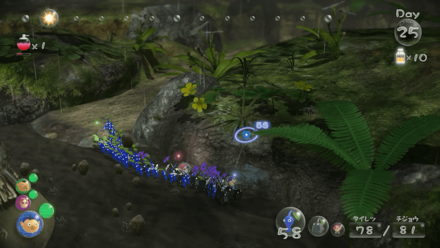 Before heading to battle, split your leaders into two groups. As noted above, have the 20-25 rock pikmin with one leader, and the remaining blue or winged pikmin with another leader. The rock pikmin are only used to break the crystal on the Quaggled Mireclops's back, and the winged or blue pikmin are used to actually damage it. 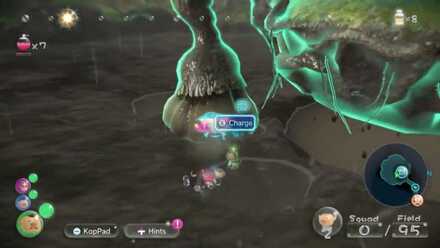 The basic pattern for this battle is to attack the Quaggled Mireclops's hooves, then attack its weakspot after it falls down. You can focus on charging your pikmin at a single hoof repeatedly until the creature comes crashing down.

If you have ultra-spicy spray, it is a good idea to use it in this battle. Right before your target hoof comes to a halt, use the spray, the have your non-rock pikmin party charge at it. Call them off before the foot lifts to avoid getting thrown off and potentially crushed, then repeat.

Use rock pikmin to break the crystal on its back 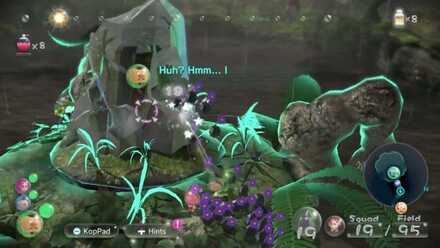 There is a large bulb that sits on the Quaggled Mireclops's back, which is protected by a large crystal. You'll need to break the crystal before you can deal any damage.

As soon as the Quaggled Mireclops falls the first time, switch to your leader with the rock pikmin, climb on top of the creature, lock onto the crystal, then throw your rock pikmin directly at it. Throwing 20 or 25 at it should be enough to break it. After a short cutscene, you'll regain control. At this time, you can move the leader and rock pikmin back toward the entrance to keep them safe.

Avoid the tongue attack or use the dodge whistle 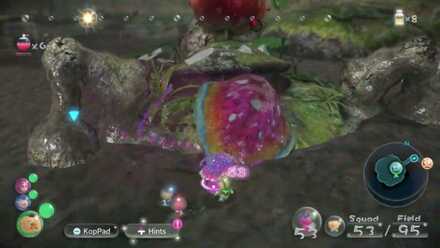 The Quaggled Mireclops's tongue attack that it uses while you are on its back is very dangerous, and if it catches up any pikmin, it will be tough to get them back. You can tell it is about to use the attack, as the flap underneath the bulb will move, so move toward the right to run away from it, or use the dodge whistile to avoid having pikmin eaten.

Attack when the flap under the bulb moves 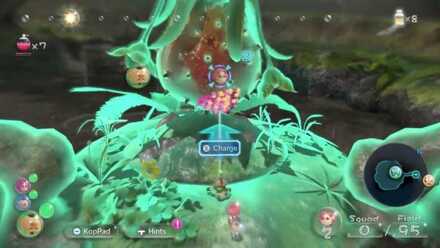 Once the Quaggled Mireclops's HP drops below 50%, it can attack with a tongue attack that encircles its whole body, but the attack itself is much longer, giving you a good chance to attack. 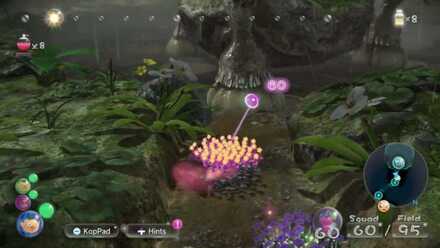 The Quaggled Mireclops's tongue attack can be a huge pain, so using the ultra-spicy spray to knock off a portion of its health much quicker is recommended. This is one of the harder bosses in Pikmin 3, so it is one of the bosses where making use of this item will be extremely beneficial, both when attacking its hooves, and the bulb. Be sure and stock up before going into battle.

Pluck the Blue and Red Pikmin

In the mission mode of this battle, you will only have Red, Rock, and Blue Pikmin, so the Winged Pikmin + Ultra-Spicy Spray strategy won't be possible. Since most attacking will be done with the Blue and Red Pikmin, its a good idea to get some more of both.

To get the platinum medal, you'll need to make proper use of all three Pikmin types. If you are aiming for a quick clear time, you'll need to have your strategy prepared. Make the boss fall by attacking its feet with Blue Pikmin, then throw Rock Pikmin at the crystal on its back to break it open.

Use Red Pikmin to attack its weak point

Afterward, the steps will be the same, but you should now attack the weak spot on its back with Red Pikmin instead. Rather than using charge, it is a good idea to throw each Red Pikmin individually at it.

Register as a member and get all the information you want. (It's free!)
Login
Opinions about an article or post go here.
Opinions about an article or post
We at Game8 thank you for your support.
In order for us to make the best articles possible, share your corrections, opinions, and thoughts about "Boss Battle Guide: How to Beat the Quaggled Mireclops" with us!
When reporting a problem, please be as specific as possible in providing details such as what conditions the problem occurred under and what kind of effects it had.