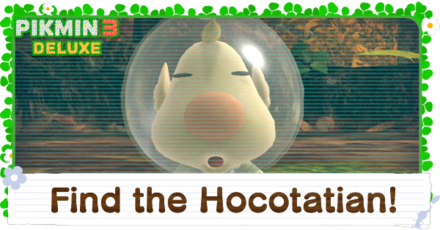 This is a story walkthrough for Find the Hocotatian! in Pikmin 3 Deluxe for the Nintendo Switch. This guide will cover using blue pikmin, rock pikmin, and winged pikmin to progress through the Garden of Hope. Read on to learn fruit locations and how to get through this section without losing any pikmin.

1: Break the dirt wall and carry the fragments

First, split into to groups: one with only Blue Pikmin (you'll want to take a lot), and the other with Winged Pikmin and Rock Pikmin. As the Blue Pikmin team, destroy the dirt wall west of the starting point, then carry the plant pot fragments. There are several enemies in the vicinity, so things will go much more smoothly if you have your Blue Pikmin charge at the enemies to take them out beforehand.

Be sure you have about 30 Pikmin of each type (the more Blue Pikmin, the better).

2: Defeat the Bug-Eyed Crawmad and collect the rest of the fragments

Make the winged pikmin charge at the Bug-Eyed Crawmad 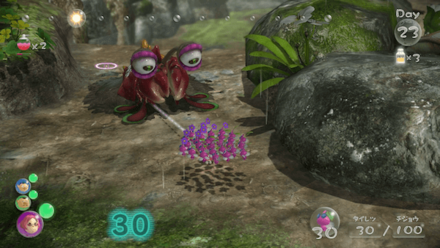 When going to move the pot fragments, the Bug-Eyed Crawmad presents a bit of a problem, so you'll want to have your Winged Pikmin charge at its eyes to take it out. Use some Ultra-Spicy Spray before charging at it, and a direct hit to its eyes should be enough to make quick work of it.

3: Cross over the pot and beat the Peckish Aristocrab 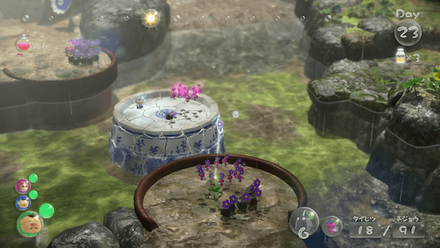 After the pot fragments have all been collected and the pot has been rebuilt, reunit the whole team and head over to the ledge just before it. First throw two leaders and the Pikmin to the pot. From the pot, throw a leader and all of your Pikmin but 5-10 Winged Pikmin to the other side. The leader and Winged Pikmin will be useful later, so keep them waiting on the pot.

4: Collect the fragments from the 3 locations and complete the blue bridge

Take control of the leader who crossed to the other side now and defeat the Peckish Aristocrab, then carry the blue fragments to the bridge. The other fragments are hidden in a large crystal and in a dirt mound, so throw your Rock Pikmin at it to break the crystal, then have about half of your Pikmin dig up the fragments and carry them over to the bridge. Split up your Pikmin and have them carry fragments from different piles to use your time more efficiently.

Aim for the Peckish Aristocrab's claw with Rock Pikmin 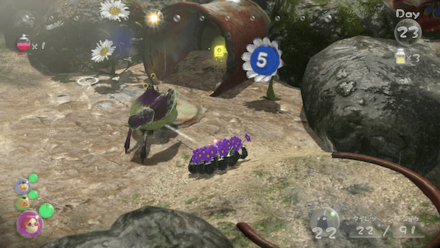 The Peckish Aristocrab can easily take out your Winged Pikmin, so instead attack it with Rock Pikmin. Rather than charging at it, throw Rock Pikmin directly at the creature's claw, and after it breaks, it will be defenseless to your attacks.

5: Collect the fruit if you have time 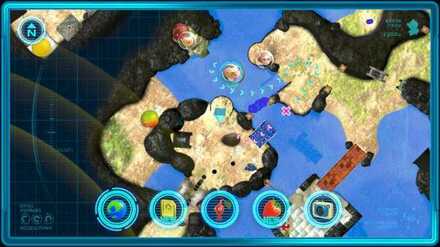 If you still have some time left after building the bridge, pick up the fruit that was nearby the pot you used to cross the water. Both the Peckish Aristocrab and Bug-Eyed Crawmad will drop some fruit after being defeated, so if you still have time, go ahead and recover these as well. 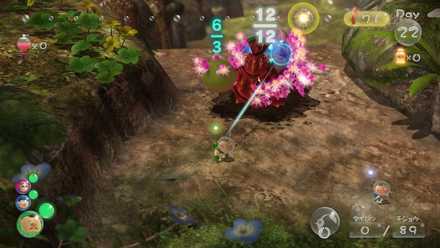 Once you defeat the Bug-Eyed Crawmad, it will drop a Searing Acidshock. It will take 3 Pikmin to carry this fruit back to the Drake for analysis.

Recover the Scaly Custard dropped by the Peckish Aristocrab 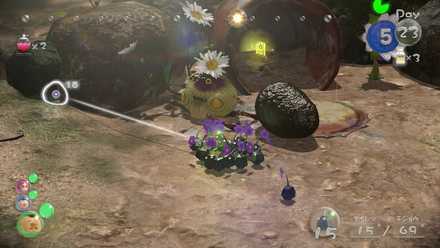 Once you defeat the Peckish Aristocrab, it will drop a Scaly Custard. It will take 8 Pikmin to carry this fruit back to the Drake for analysis. 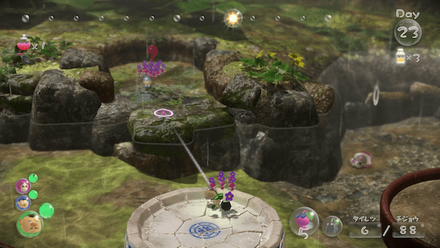 Throw another leader to the pot where you previously left a single leader. From the pot, throw a leader and the Winged Pikmin to the cliff to the east. 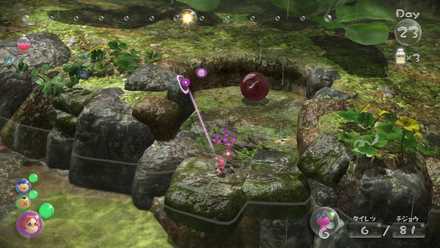 From there, have the Winged Pikmin pull up the flukeweed to uncover a Lesser Mock Bottom. The fruit will take at least 5 Pikmin to carry it, so be sure and throw at least that many Winged Pikmin over so that you can recover it.

Register as a member and get all the information you want. (It's free!)
Login
Opinions about an article or post go here.
Opinions about an article or post
We at Game8 thank you for your support.
In order for us to make the best articles possible, share your corrections, opinions, and thoughts about "Find the Hocotatian! Walkthrough" with us!
When reporting a problem, please be as specific as possible in providing details such as what conditions the problem occurred under and what kind of effects it had.