Save the Hocotatian! Walkthrough | Pikmin 3 Deluxe 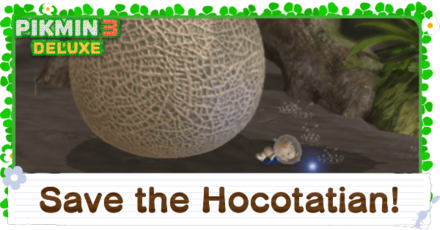 This is a story walkthrough for Save the Hocotatian! in Pikmin 3 Deluxe for the Nintendo Switch. This guide will cover defeating the Quaggled Mireclops, the boss of the Garden of Hope, as well as retrieving Louie and collecting all fruits. Read on for more tips and strategy! 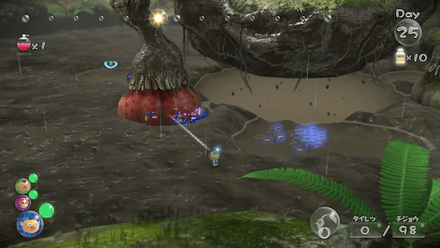 With the path open to the Garden of Hope's second boss, the Quaggled Mireclops, it's time to head for battle. As one of the harder boss fights in the game, it's important to know the correct way to fight this creature, or else you will lose a lot of Pikmin.

The Quaggled Mireclops's tongue attack is very annoying to deal with, so be sure and use the Dodge Whistle when you see it coming to avoid any casualties.

First, break the crystal on its back with rock pikmin 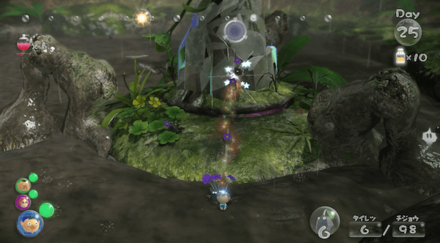 When you first climb up its back, you'll need to throw about 20-25 Rock Pikmin at the large crystal to break it and expose its weak point. After breaking this, you can have the Rock Pikmin wait in a safe area while you attack using only Winged or Blue Pikmin. Have your Pikmin types divided into two teams, with one waiting toward the entrance, then switch leaders when it is time to use the other Pikmin type. Once defeated, it will drop a Wayward Moon.

2: Use the elevator platforms to the west to recover the fruit 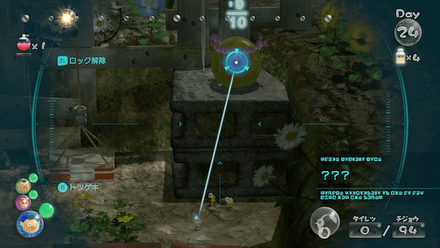 To the west, there are some elevator platforms, which can be used to recover two fruit. If you were able to defeat the Quaggled Mireclops with plenty of time remaining, head over to obtain them. One of them is behind an electric gate, so it would be best to bring both Yellow Pikmin and Winged Pikmin.

You can even avoid doing the elevator puzzle altogether by throwing your Winged Pikmin at it, so it is not too difficult to obtain.

By completing this puzzle, you can get both a Zest Bomb and an Astringent Clump.

3: Use the elevator platforms to the north to recover the fruit 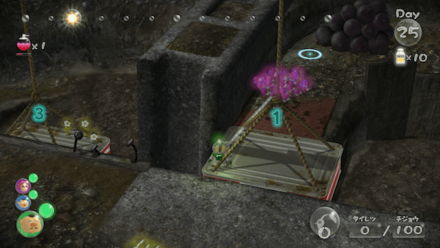 There is another elevator section in the north part of the map, with another fruit just waiting for you to recover it. Throw two Pikmin on the left platform, and cross over the lifted platform, making sure not to cause it to fall (you can do this by throwing leaders and pikmin to the other side). In order to avoid accidentally dropping the platform, use the Winged Pikmin, which can fly straight over the platform without weighing it down. By completing this puzzle, you can recover Dusk Pustules.

4: Defeat the Bug-Eyed Crawmad if you have time 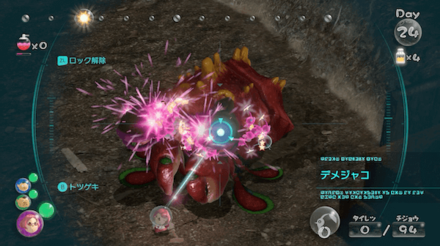 Right past where you got the Dusk Pustules from the elevator platforms, there is another Bug-Eyed Crawmad that can be defeated to obtain a Stellar Extrusion . After they return from recovering the Dusk Pustules, gather your Winged Pikmin up and proceed to the cave. Like before, use Ultra-Spicy Spray on the Winged Pikmin, then have them charge directly at the Crawmad's eyes to make quick work of it. Recover the fruit it drops before ending the day (if you still had time).

Register as a member and get all the information you want. (It's free!)
Login
Opinions about an article or post go here.
Opinions about an article or post
We at Game8 thank you for your support.
In order for us to make the best articles possible, share your corrections, opinions, and thoughts about "Save the Hocotatian! Walkthrough" with us!
When reporting a problem, please be as specific as possible in providing details such as what conditions the problem occurred under and what kind of effects it had.