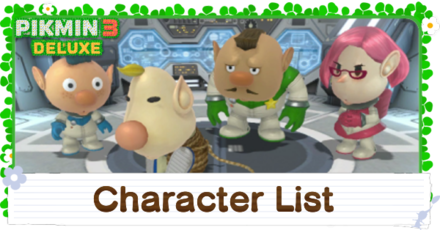 A list of all characters who appear in Pikmin 3 Deluxe for the Nintendo Switch. All characters from both the S.S. Drake and S.S. Dolphin, as well as their profile can be found here!

All S.S. Drake Characters are playable characters in the main story mode of Pikmin 3 Deluxe. in addition, they can be played in other modes, such as Mission Mode. These characters hail from a planet called Koppai, where they have exhausted their resources, leading them to search elsewhere.

The S.S. Dophin crew members play a vital role in the Story of Pikmin 3 Deluxe, although they are only playable in Side Stories, as well as bonus modes like Mission Mode. These characters are from a planet called Hocotate

Post (0 Comments)
Opinions about an article or post go here.
Opinions about an article or post
We at Game8 thank you for your support.
In order for us to make the best articles possible, share your corrections, opinions, and thoughts about "Character List: All Playable Characters" with us!
When reporting a problem, please be as specific as possible in providing details such as what conditions the problem occurred under and what kind of effects it had.