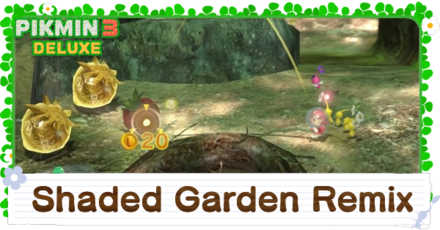 A guide to obtaining the platinum medal for the Collect Treasure! Mission: Shaded Garden Remix in Pikmin 3 Deluxe for the Nintendo Switch. This guide will walk you through how to clear the mission and earn a platinum medal!

Effectively Use the Bomb Rocks 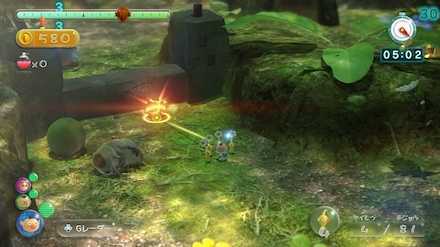 Many bothersome enemies as well as an iron wall appear in Shaded Garden Remix. Ordinary methods won't do the trick here. We will need make effective use the Bomb Rocks scattered in various locations and utilize them for defeating enemies and exploration. 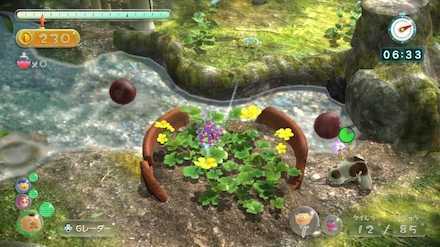 Whether it be high ledges, water area, or the appearance of a Bearded Amprat, aim to make use of each Pikmins' specialty in every obstacle. Let's efficiently retrieve items and take down enemies by making the right judgment call for each Pikmin in each situation.

1：Split into 3 Groups and Retrieve Pikmin 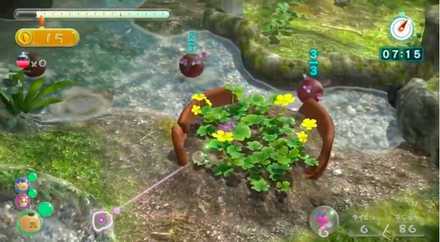 First, throw Brittany and Charlie onto the stump and then pluck the Yellow Pikmin behind you. Following that, head south and defeat and retrieve the Dwarf Bulborb. Throw the remaining Pikmin at the hole and retrieve the Bomb Rock.

Make use of the Dodge Whistle and dive into the eastern area. Pluck the Yellow Pikmin and throw 3 of them to retrieve Bomb Rocks. 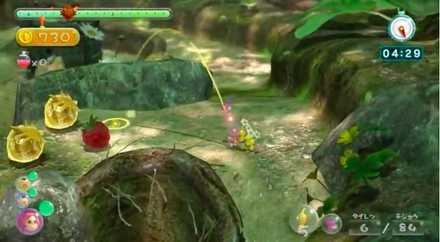 Take the Yellow Pikmin with you until you reach the area Charlie is in and throw them at the Bearded Amprat. The Bearded Amprat will drop a Searing Acidshock upon death. Throw the remaining Pikmin to the other side. After that, take the Yellow Pikmin that defeated the Beared Amprat and use the Go Here function to head towards the area where the Bomb Rocks were taken out.

Head south and defeat the Burrowing Snagret with a Bomb Rock. After defeating it, defeat the enemies in the north area and retrieve the nearby Dusk Pustules and other fruit while also plucking Blue Pikmin.

Retrieve the Lesser Mock Bottom, Juicy Gaggle, Cupid's Grenade, and all the other surrounding fruits with Winged Pikmin and head back to the starting area by using the Go Here function. After arriving, retrieve the Pikmin at the starting area and defeat the Waddlepus in the southwest. Transport the fruit located behind it as well as its body and the Rock Bomb.

From here, go defeat the Bug-Eyed Crawmad near the start using a Bomb Rock and recover its body as well as the fruit on the west side. 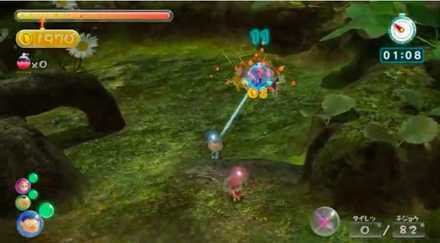 After defeating all the enemies, have your Pikmin retrieve the Nuggets located in the eastern and northern areas. Only after having defeated the enemies will retrieving fruits be able to go smoothly.

Post (0 Comments)
Opinions about an article or post go here.
Opinions about an article or post
We at Game8 thank you for your support.
In order for us to make the best articles possible, share your corrections, opinions, and thoughts about "Shaded Garden Remix Platinum Medal Walkthrough (Collect Treasure!)" with us!
When reporting a problem, please be as specific as possible in providing details such as what conditions the problem occurred under and what kind of effects it had.