Learn how to beat Zorah Magdoros in the game Monster Hunter World (MHW)! This guide explains everything about Zorah Magdoros's weakness, carves, rewards, and a complete strategy guide for beating and capturing it. Find out what parts are breakable and severable, and what drops and Monster materials are available.

How to Beat Zorah Magdoros

Things to Know in Advance

The Zora Magdoros fight is divided into two phases, destroying the Magma Cores and finish off using the turrets. In the first phase, you will fly into Zorah Magdoros' back and search for the magma cores scattered around his back.

These magma cores will occasionally explode and cover the surrounding area with magma. It is recommended that you use a long-range weapon like a Heavy Bowgun or Light Bowgun during this phase for consistent damage.

The first magma core can be easily found by following the path in front of you as you land on Zora Magdoros' back. Do not forget to use a Cool Drink to counter extreme heat as you hit the magma core.

After destroying the first magma core, proceed to destroy the second by going left from where you are. Here you will have to descend from a cliff and continue following the path until you reach the second magma core.

The final magma core can be found inside the small hole at the center of Zorah Magdoros. If you are using a melee weapon, it will be difficult to avoid incoming lava that is coming out of the magma core. You should use a Rocksteady Mantle or a Temporal Mantle and destroy it as fast as possible. 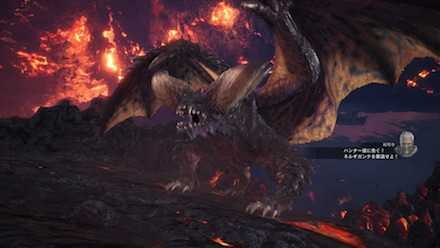 Nergigante will join in the fight as you are destroying the magma cores and the Commander will ask you to repel him before finishing your objectives. However, you can completely ignore Nergigante and he will eventually leave after a few minutes.

Attack From the Center

After moving to the barricade, immediately move to the cannon at the center of the map and fill it with shells while waiting for Zorah Magdoros to get a little closer for guaranteed shots.

Note: Be sure that you adjust the direction of the cannon before firing the shells.

Next, you will have to move east and then use the second cannon after NPC hunters finished loading the shells. After firing the cannon, make sure that you drop down the ledge and take the shortcut leading to the west side of the barricade.

Once you reach the western end of the barricade, use the nearby cannon before jumping on to the ship below you. Make sure that you do an aerial attack to avoid losing time from tripping after the jump.

Inside the ship, there will be two cannons that are ready to fire because of the NPCs, be sure to adjust their direction and use them immediately.

From here, help the NPCs load up the cannon and continue your attacks against Zorah Magdoros until the Dragonator is ready.

The Dragonator is a powerful weapon that is attached at the rear end of the ship, you can use this as soon as it is ready but it can completely miss if Zorah Magdoros is not close enough. Make sure that Zorah Magdoros is within its range before using it to deal massive damage.

You can use the Dragonator by activating the bow at the center of the ship deck.

Flying Back to the Barricade

After exhausting all of the shells at the ship, it will not be efficient if you stay here longer. Immediately move back to the barricade using the Hitching Post on the ship deck.

As soon as you get back to the barricade, fire all of the remaining cannons until you repel Zorah Magdoros.

When moving around Zorah Magdoros' back, you will constantly be affected by extreme heat. It is best that you use a Cool Drink to prevent taking any damage from this and focus on attacking the magma core instead of healing.

You can make the run a lot easier by using the skill Heavy Artillery to maximize your damage output even when using the cannons at the barricade where you fend off Zorah Magdoros.

During this quest, you can leave Nergigante alone and immediately move to your next objective. After a few minutes, Nergigante will eventually leave without having to fight him.

Register as a member and get all the information you want. (It's free!)
Login
Opinions about an article or post go here.
Opinions about an article or post
We at Game8 thank you for your support.
In order for us to make the best articles possible, share your corrections, opinions, and thoughts about "Zorah Magdoros Weakness and Strategy Guide" with us!
When reporting a problem, please be as specific as possible in providing details such as what conditions the problem occurred under and what kind of effects it had.