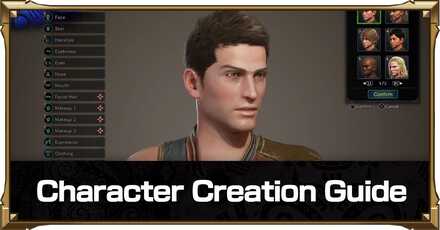 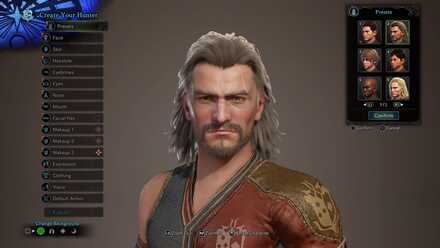 Unlike the past series, you can modify the appearance of your hunter at a deeper level with a very intuitive character creation system. You will be able to take on the New World with a unique look!

Parts That Can Be Customized in MHW

How to Change Character Appearance in Monster Hunter World 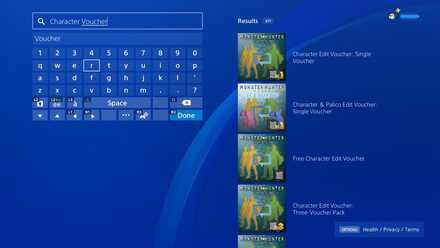 If you want to change the appearance of your character without restarting the game, you can claim a free Character Edit Voucher if you have played before March 16, 2018.

After that, it can be bought from the PlayStation Store as a paid DLC. 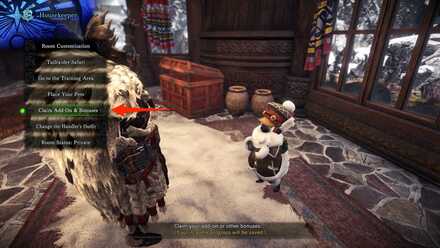 After downloading the Character Edit Voucher from the PlayStation Store, it can be claimed in-game from the Housekeeper inside Your Room.

Edit at the Save Data Screen 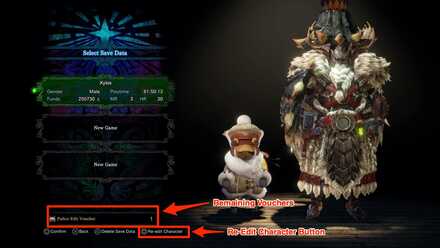 The Character Edit Voucher can be used from the Save Data Screen. Simply place the cursor on the character you want to edit and press □ to Re-Edit Character.

Parts That Can Be Changed Without Using a Ticket

There are certain parts of the Hunter that can be changed without using a Character Edit Voucher. You can change these parts in Your House from the Item Box. 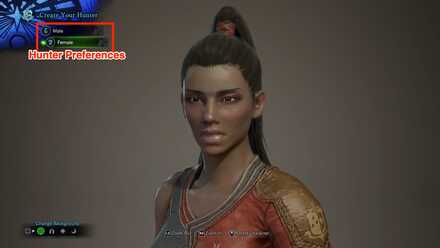 Players can choose between a Male and a Female Hunter. 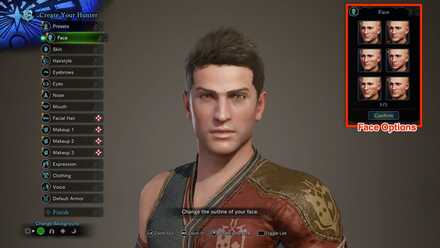 Face customization is done by choosing between several types of face contours present in the game. 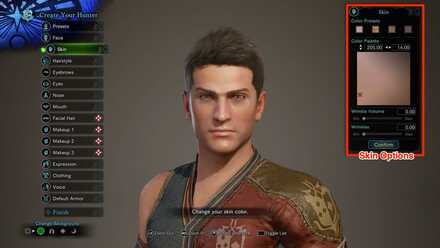 The color, wrinkle volume, and wrinkle depth can be changed. The skin color can also be chosen with a color palette allowing for more accurate color representation. 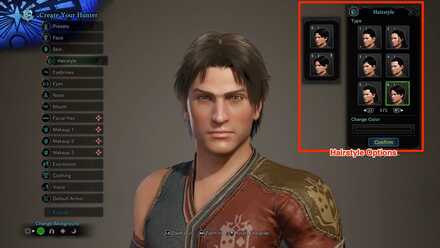 Hairstyles are chosen from several types of hairstyle presets. The color can also be freely chosen.

There is no distinction in hairstyles between male and female hunters. Male hunters can have female hairstyles and vice versa. 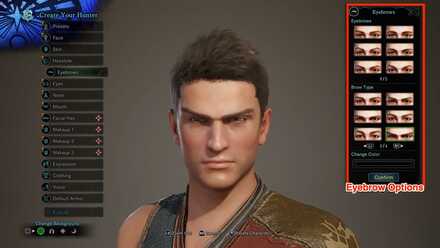 Eyebrows are also chosen from several types of preset eyebrows. Eyebrow color, depth, and carving can be changed as well. 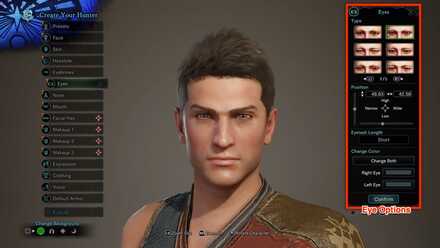 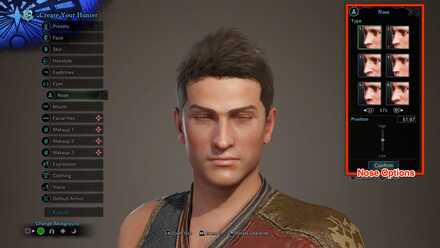 Players choose between a number of nose presets as well as adjust the nose height and position. 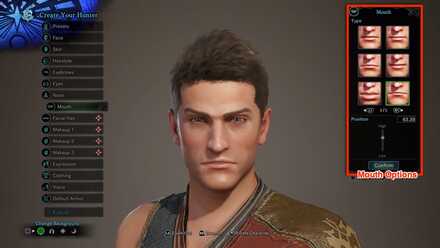 The mouth can be customized the same way as the nose. 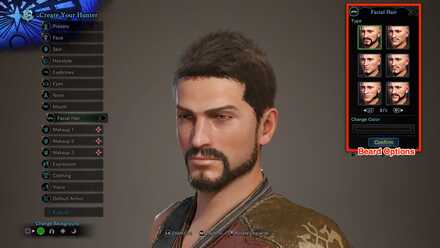 Beards are chosen from several types of beard presets. The color can be changed as well. 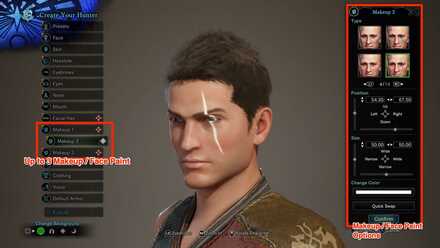 Make-Up like blush, lipstick, and eye shadow can be applied on the Hunter's face. Several patterns can be put as well.

Fine color adjustments like saturation, brightness, gloss, metallic, and transparency can be applied. Hunter can put up to three layers of make-up/face paint per hunter. 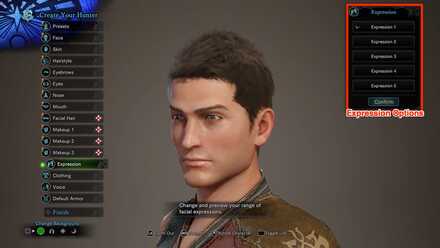 Players can choose from 5 types of facial expressions. 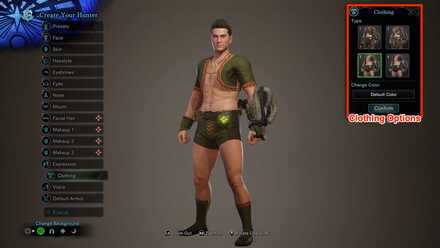 Players choose between 4 types of clothing for the Hunter. The color of the clothing can be changed as well. 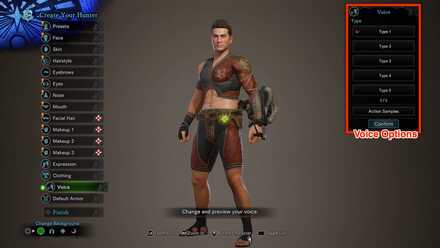 Players can choose between 20 types of voices in Monster Hunter World. You can also sample each voice clips in-game! 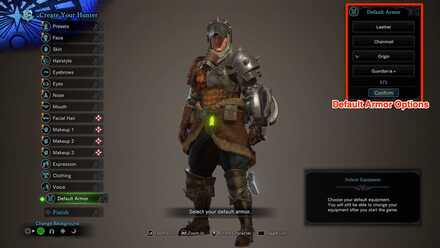 Initial equipment is also chosen here. If you are playing the base game, you can choose between the Leather, Chainmail, and Guardian α+ armor sets. If you pre-ordered, you can also choose the Origin armor. 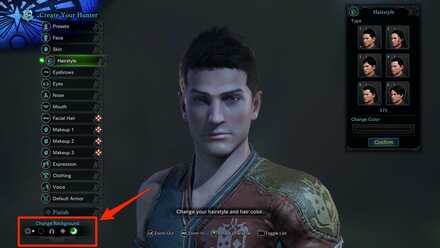 The background can also be changed while customizing by pressing the □ button.

This can help in choosing which custom look is better for each lighting condition. 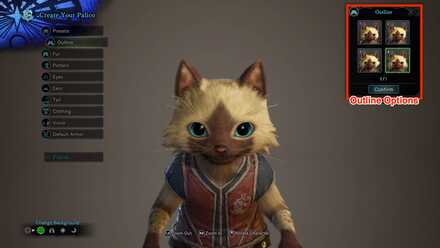 The outline of the Palico's face can be changed. Players can freely choose between 4 settings. 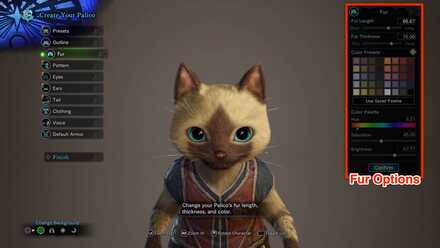 Fur length, thickness, and color can be changed. 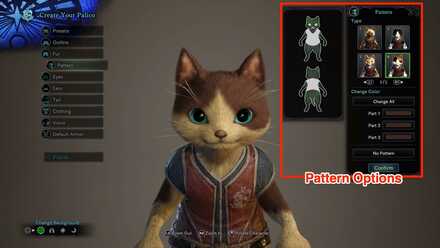 The pattern on your Palico can be chosen from 6 presets. The color combination for the pattern can be changed as well. 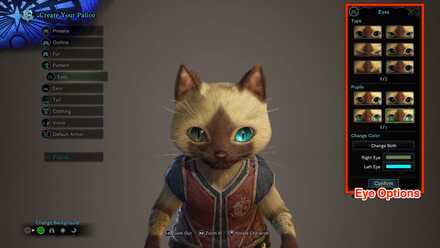 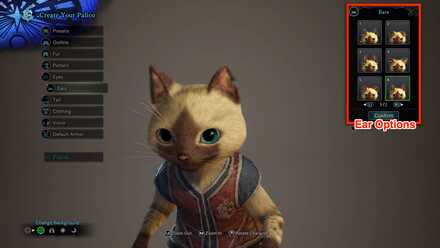 Players can choose between 12 different ear presets for their Palico. 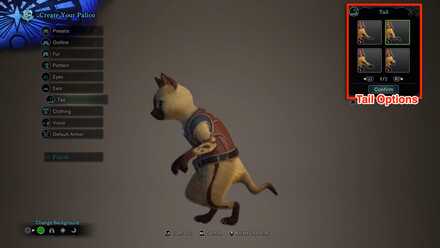 Players can also choose between 7 types of tails for their Palico. 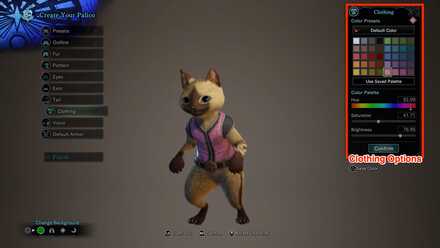 The color of the Palico's clothing can be changed as well. Players can also choose using a color palette in-game. 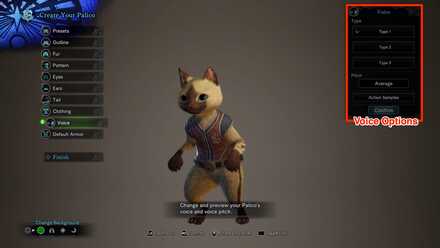 The Palico's voice can be changed by choosing between three types of sounds. The pitch may also be set from Low to High. 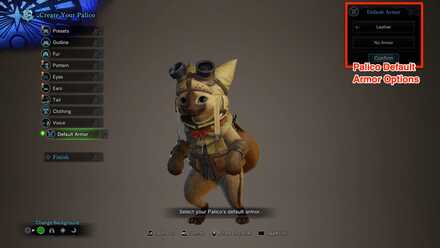 The Palico's default armor is the Leather armor. Players can also choose to not set a default armor for their Palico by choosing No Armor.

In order for us to make the best articles possible, share your corrections, opinions, and thoughts about 「Character Creation Guide and How To Change Appearance | Monster Hunter World (MHW)」 with us!