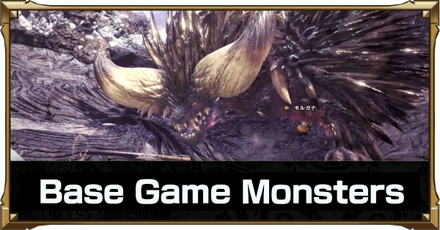 This is a list of all Monsters in Monster Hunter World (MHW). Here we list all monsters by type, ranging from Large Monsters, their Tempered and Colored Variants, as well as Small Monsters. Read on to know more about the game's monsters!

This page includes information on all monsters in Monster Hunter World (MHW). Take note that these monsters are only those which are available in the Base Game, excluding those in the Iceborne Expansion. If you're looking for a list of monsters from the Iceborne Expanion, see the link below.

Large Monsters are Monsters that presents a certain challenge to conquer. They are the main attraction of the game and learning how to best these mighty foes is the mark of a true hunter.

These monsters works the same way as tempered monsters. They are stronger, more aggressive, and some even have new effects on their moves. The difference is they offer a different set of loots for the players which can be used to craft different set of armour.

What are Tempered Monsters?

These monsters are stronger version of the usual forms. They sport higher damage than their normal counterparts and higher stats as well. This however, is accompanied with greater rewards for defeating them. Team up with others to beat them or fight them solo to prove your worth!

These monsters are the pinnacle form of their base form. They deal massive damage even when compared to their tempered counterparts. Defeating them rewards you with tickets that can allow you to craft a completely new set of armor from that category.

These monsters are sources of materials that can be used for crafting low end gears. They are also fought by new hunters in lower ranked missions for the hunters to get accustomed to battle.

In order for us to make the best articles possible, share your corrections, opinions, and thoughts about 「Monster Strategy Guides and List of All Monsters (Base Game) | Monster Hunter World (MHW)」 with us!