This is a guide to side quests in Xenoblade Chronicles: Definitive Edition (XC1) for the Nintendo Switch. Here you can find a list of all quests in each area, as well as their EXP, area affinity, money, and item rewards.

Accept Side Quests from NPCs 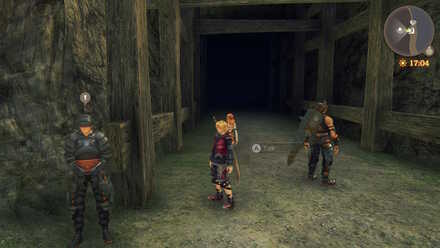 When you come across an NPC with a (!) symbol above their head, it means they have a quest for you! Speak with them and accept their quest. There is no limit for the amount of quests you can accept, and many of them will be cleared naturally as you play, so accept every one of them that you come across!

Side Quests are generally available in most areas, so be sure to pick them all up when you reach a new area! For the most part, they involve completing some errand, such as collecting a type of item, defeating a ceratin number of monsters, or speaking with another NPC, and do not involve too much effort.

Completing Side Quests are a great way to earn both Money and EXP, allowing you to level up your party and buy new equipment. If you are struggling to buy equipment in shops, or you are underleveled, take a break from the main story and do some questing! You'll be able to see quest rewards when accepting the quests, and they are also viewable in the Quests Menu. 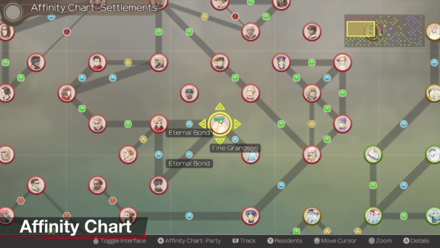 There are 5 settlements of the worldーColony 9 Area, Colony 6 Area, Central Bionis, Upper Bionis, and Hidden Villageーwhere completing side quests earn you Area Affinity (Reputation). As your reputation grows, you will be able to participate in even more quests in that area, eventually unlocking even greater rewards, such as new Skill Trees or Monado Arts!

Each time you speak with an NPC with a name, they are added to your Settlement Affinity Chart. Speak with them and complete their quests to fill in the chart for all characters in the area!

Some Quests Have a Time Limit! 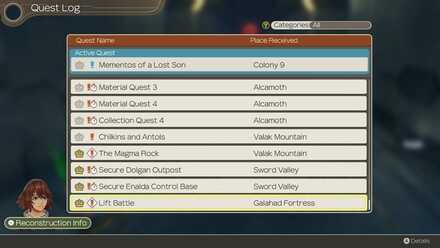 Xenoblade Chronicles also features Timed Quests. These are quests that must be completed before a certain portion of the game, or else you will become unable to clear them. These quests are marked with a clock on the Quest Menu, so when you come across one, before and clear it before missing your chance!

Click on a link below to see all of the quests within an area. The lists are arranged by order encountered, and areas with the same area affinity.

Register as a member and get all the information you want. (It's free!)
Login
Opinions about an article or post go here.
Opinions about an article or post
We at Game8 thank you for your support.
In order for us to make the best articles possible, share your corrections, opinions, and thoughts about "Side Quest Guide | List of Side Quests" with us!
When reporting a problem, please be as specific as possible in providing details such as what conditions the problem occurred under and what kind of effects it had.