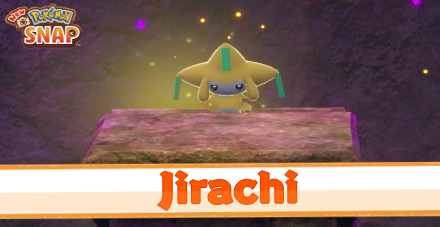 This is a guide to Jirachi's Photodex entry in New Pokemon Snap (Pokemon Snap 2) for the Nintendo Switch. Here you can find out how to take one star, two star, three star, and four star photos for Jirachi, and how to get a diamond star rating!

Where to Find Jirachi

How to Get All Stars for Jirachi

How to Take Jirachi 1 Star Photo

You can take Jirachi's 1 Star Photo as soon as you complete the main story and have reached Research Level 2 at the Ruins.

Start the course and wait until you reach the Ancient Ruins with some Eldegoss. Look up to find Jirachi hovering below them and take its photo as soon as it flies towards your direction.

How to Take Jirachi 2 Star Photo

Start the Ruins course at Research Level 2 and wait until you reach the area with six crystablooms. Look for the third Steelix statue to find Jirachi sitting on top of it. Take a photo of it to achieve 2 Star.

How to Take Jirachi 3 Star Photo

You can get a 3 Star Photo of Jirachi once you have unlocked the Ruins at Research Level 3. Proceed through the course and light up all Crystablooms in the ruins area and wake up Jirachi on the Steelix statue.

After lighting up all the Crystablooms, use Turbo to get in front of Jirachi before it appears near the exit point.

How to Take Jirachi 4 Star Photo

Taking a 4 Star Photo of Jirachi requires some steps. You need to activate all six Crystablooms in the ruins area and wake up Jirachi on the Steelix statue.

After lighting up all the Crystablooms, wait for Jirachi to appear near the Golurk at the exit point and play the Melody. Take a photo it holding its hands together to get its 4 Star Photo.

Register as a member and get all the information you want. (It's free!)
Login
Opinions about an article or post go here.
Opinions about an article or post
We at Game8 thank you for your support.
In order for us to make the best articles possible, share your corrections, opinions, and thoughts about "Jirachi Locations and How to Get All Stars" with us!
When reporting a problem, please be as specific as possible in providing details such as what conditions the problem occurred under and what kind of effects it had.