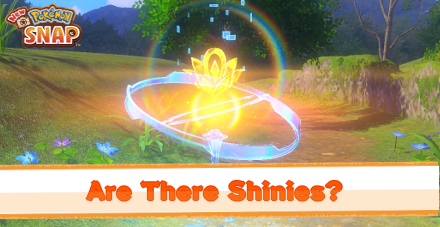 Are There Shiny Pokemon?

After hundreds of cumulative hours between our walkthrough staff, there doesn't appear to be any shiny Pokemon that can be found in New Pokemon Snap. We'll make sure to update this page if anything changes, but for now it seems that the only variations in color are ones for Pokemon who already have multiple forms.

Color and Gender Variations are Available

Some Pokemon, such as Vivillon, have several forms that can be seen when embarking on a research expedition. For example, you can find it in its Meadow Pattern at the Park and its Sandstorm Pattern at the Sands.

Where to Find All Vivillon Wing Patterns

Likewise, some Pokemon do have slight variations in their appearance according to their gender. One example is Pikachu's gender variation. The female Pikachu has a heart-shape on its tail while the male variant does not have any such pattern.

Register as a member and get all the information you want. (It's free!)
Login
Opinions about an article or post go here.
Opinions about an article or post
We at Game8 thank you for your support.
In order for us to make the best articles possible, share your corrections, opinions, and thoughts about "Shiny Pokemon Guide: Are There Shinies in Pokemon Snap" with us!
When reporting a problem, please be as specific as possible in providing details such as what conditions the problem occurred under and what kind of effects it had.