This is a guide to Abomasnow's Photodex entry in New Pokemon Snap (Pokemon Snap 2) for the Nintendo Switch. Here you can find out how to take one star, two star, three star, and four star photos for Abomasnow, and how to get a diamond star rating!

Where to Find Abomasnow

How to Get All Stars for Abomasnow

How to Take Abomasnow 1 Star Photo

Near the end of the Snowfields (Night) course, you can find an Abomasnow gleefully frolicking on the snow. Take a photo of the Abomasnow as it prances around.

How to Take Abomasnow 2 Star Photo

Hit Abomasnow with a Fluffruit

As you approach the final area of the Snowfields (Night) course, you can see an Abomasnow following a Frosmoth as it flies in the air. It will momentarily stop before Frosmoth flies away. Toss a Fluffruit at the Abomasnow while it is staring at the Frosmoth and take a photo of it as it angrily looks at the player.

How to Take Abomasnow 3 Star Photo 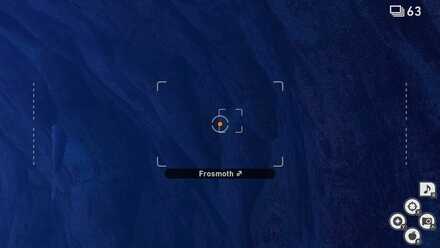 To take a 3 Star photo of Abomasnow, you first need to knock the Frosmoth in the cave off the wall to get it to appear in the final area of the course. As you enter the cave in the main route of Snowfields (Night), toss a Fluffruit at the Frosmoth shown in the above image.

As you exit the cave, you should see an Abomasnow following a Frosmoth. After that Frosmoth flies away, Abomasnow will walk over to the other Frosmoth and watch it fly around. Toss an Illumina Orb at that Frosmoth to excite Abomasnow. Take a photo of Abomasnow as it excitedly does the pose shown in the photo.

How to Take Abomasnow 4 Star Photo

To take a 4 Star photo of Abomasnow, you need to follow the steps to complete the Whiteout request and capture the moment that Abomasnow triggers the blizzard.

Register as a member and get all the information you want. (It's free!)
Login
Opinions about an article or post go here.
Opinions about an article or post
We at Game8 thank you for your support.
In order for us to make the best articles possible, share your corrections, opinions, and thoughts about "Abomasnow Locations and How to Get All Stars" with us!
When reporting a problem, please be as specific as possible in providing details such as what conditions the problem occurred under and what kind of effects it had.