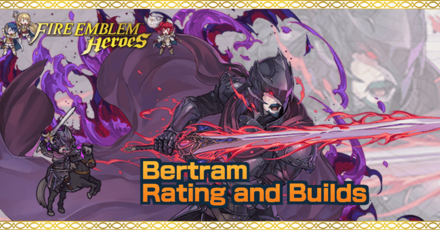 This is a ranking page for the hero Bertram - Dread Cavalier from the game Fire Emblem Heroes (FEH). Read on to learn the best IVs (Individual Values), best builds (Inherit Skill), weapon refinement, stats at Lv 40, and more for Bertram.

As a hero obtainable only through Grand Hero Battle, Bertram will always have neutral IVs by default. The only way to access IVs for this unit is through using Trait Fruits.

The best IVs for Bertramh are +Def and -Spd. Bertram's role is a physical tank, and he excels in that role and that role alone. Boosting his Def is the highest priority in making Bertram a viable unit.

Both his Spd and Res stats are the lesser important stats for Bertram, but we chose to go with -Spd due to his role as a tank; he may need to absorb a magical hit or two.

We recommend a +Def IV when merging Bertram to +10 for the same reasons mentioned above. Bertram's role is a physical tank, and Def is the most important stat for that role.

This is a premium build for Bertram as a physical wall. Pledged Blade+ grants special acceleration which quickly charges up Bonfire to land a huge attack on the opponent.

This is a budget build for Bertram using his base kit as a starting point. If you have Quick Riposte 3 available, you may use that as his B skill to turn him into a dual phase unit.

Note: Bertram's stats will always have no IVs.

Bertram is a close physical attacker (range = 1). Therefore, when not accounting for the Weapon Triangle, the amount of damage he deals will be equivalent to his Atk minus the foe's Def stat.

Bertram comes with Instant Sword+ in his kit, which is the sword version of its counterparts Instant Lance+, Instant Axe+, and Instant Bow+.

Like the other Instant weapons, this sword suits slower units who cannot reliably perform a follow-up attack with their Spd stats, hence negating enemy follow-up attacks is the method of choice for making combat fair.

Bertram has very high physical bulk with his base HP and Def of 45 and 38 respectively. He excels in this role and should be used as such.

Additionally, Bertram's base kit is perfectly suited to take advantage of his strengths, especially with Instant Sword+ and Rouse Atk/Def 3 boosting his Atk and Def stats both in and out of combat.

Stats other than HP and Def are all mediocre

Bertram may have high HP and Def, but all of his other stats are rather low, especially for a 5th generation unit. His Atk at base 37 can be salvaged with the correct passive skills, but his Spd and Res are too low to make good use of at base 27 and 26 respectively.

Since Bertram was not released as a 5★ unit, he does not possess premium fodder. For him to be able to make an impact in competitive maps, Summoners will have to invest on him quite extensively.

We Do Not Recommend Unlocking Potential for Bertram - Dread Cavalier!

Bertram as a Source Hero

Bertram really only has Instant Sword+ as desired fodder. His other skills are either very niche or could be obtained elsewhere more easily.

Instant Sword+ is a good inheritable weapon, so save your Bertram copies as combat manuals in case you need it.

How to Get Bertram / Illustrations / Voice Actor / Quotes

How to Get Bertram

Bertram is a Hero who, for a limited time, can be obtained through completing a Grand Hero Battle for the first time. They do not appear in regular summons. After the event has ended, they can be obtained by using Heroic Grails.

Register as a member and get all the information you want. (It's free!)
Login
Opinions about an article or post go here.
Opinions about an article or post
We at Game8 thank you for your support.
In order for us to make the best articles possible, share your corrections, opinions, and thoughts about "Bertram Builds and Best IVs" with us!
When reporting a problem, please be as specific as possible in providing details such as what conditions the problem occurred under and what kind of effects it had.