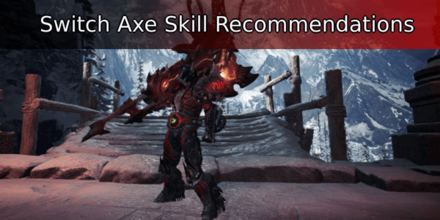 This is a guide about the best skills for Switch Axes. Read on to know which skills to look out for when making a Switch Axe build and why.

Switch Axes do not need much in terms of offensive skills because they naturally place high up in the damage charts. That is not to say that Affinity Skills have no place in a Switch Axe's build.

The Switch Axe's Phial attacks (including Phial discharges) can crit and have amplified damage on tenderized parts. This is where skills such as Weakness Exploit and Critical boost come in as they synergize well with the Switch Axe's Clutch Claw-reliant moveset and mechanics very well.

A High-Affinity Switch Axe in the hands of an experienced hunter can lead to some of the most insane damage outputs seen in Monster Hunter World.

The Switch Axe's damage output is comparable to a Charge Blade's but paired with the precision of a Lance. This makes the Switch Axe one of the most efficient part breakers in the Monster Hunter World.

Earplugs offer total protection against a monster's roar at level five. This synergizes well for the Switch Axe as its damage combos are often long and slow.

It is important to note that during a Sword Form's Zero Sum Discharge Attack, Hunters will have level four Earplugs naturally, This means hunters need only one level in Earplugs to be completely immune during the full duration of Zero Sum Discharge.

Switch Axes need to be in constant close-range to deal its high damage. Divine Blessing offers an extra layer of protection for hunters as it reduces the damage infliced by the monster attack that triggered it by 50% at level three.

The Focus Skill's benefits are targetted towards the Switch Axe's Sword Form. The skill Increases gauge fill rates by 20% at level three, making it easier for hunters to re-apply their Sword Form's Amped State.

The Switch Axe's sheathing speed is one of the slowest in the game. Hunters who find this an issue may consider using Quick Sheath in their builds. This skill greatly improves the sheathing speed at level three.

Unlike its Sword Form, The Switch Axe's Axe Form can deflect off a monster's hide if it is thick enough.

Hunters who find this an issue can consider using Mind's Eye/Ballistics to completely prevent attacks from deflecting off a monster, no matter how hard its hide is!

Register as a member and get all the information you want. (It's free!)
Login
Opinions about an article or post go here.
Opinions about an article or post
We at Game8 thank you for your support.
In order for us to make the best articles possible, share your corrections, opinions, and thoughts about "Best Skills for Switch Axes" with us!
When reporting a problem, please be as specific as possible in providing details such as what conditions the problem occurred under and what kind of effects it had.