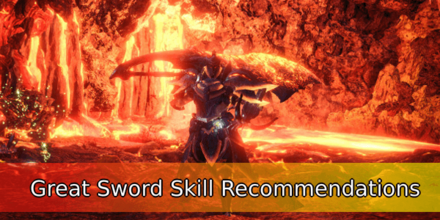 This is a guide about the best skills for Great Swords. Read on to know which skills to look out for when making a Great Sword build and why.

Great Swords have the highest base damages in the game. Investing in any of these Affinity Skills is definitely recommended for an immense increase in overall damage.

Critical Draw increases the affinity of Draw Attacks by 100% at level three and is a great skill to compliment the Great Sword's general sheath-heavy playstyle.

Ran out of skills to fill those vacant gem slots? Boosting a Great Sword's already high base damage is a good way to fill them up!

Strange as it may seem, The Great Sword is considered to be one of the best mounting weapons in the game. This is due to their insanely high Jumping Attack damage.

Airborne increases Jumping Attack Power by 30% and is definitely worth considering when making Great Sword builds.

These synergize well with the True Element skill bonus from Velkhana Divinity.

Divine Blessing is an excellent defensive skill that when activated, reduces the incoming damage by 50% at level three from the attack that triggered it. This skill offers a much needed extra layer of suvivability for Great Swords. Divine Blessing levels four and five are unlocked via the Divine Blessing Secret.

While Great Swords can block attacks with its huge blade, it is important to note that Great Swords blocks are not as efficient in blocking as Gunlances, Lances, and Charge Blades are.

Evade Extender greatly increases the distance covered by dodge rolls at level three. This is a great defensive option for Great Swords as their dodges when unsheathed are short and heavy.

Every swing matters for a Great Sword. Earplugs offer complete protection against monster roars at level five and ensures that hunters are uninterrupted mid-swing!

A monster's hide can be so thick in specific areas that even the Great Sword's massive hits can bounce off of them. Mind's Eye/Ballistics is the perfect solution to this problem as it prevents attacks from being deflected no matter how thick a monster's hide is.

Positioning matters a lot when hunting with a Great Sword. Quick Sheath greatly increases sheathing speed at level three and allows hunters to quickly relocate to a more advantageous spot if the need arises.

Most Great Swords have vacant spaces in their sharpness guages. Handicraft increases weapon sharpness by 50 at level five and is definitely something to consider when making Great Sword builds.

Take note that Handicraft will NOT exceed a weapon's maximum sharpness.

Register as a member and get all the information you want. (It's free!)
Login
Opinions about an article or post go here.
Opinions about an article or post
We at Game8 thank you for your support.
In order for us to make the best articles possible, share your corrections, opinions, and thoughts about "Best Skills for Great Swords" with us!
When reporting a problem, please be as specific as possible in providing details such as what conditions the problem occurred under and what kind of effects it had.