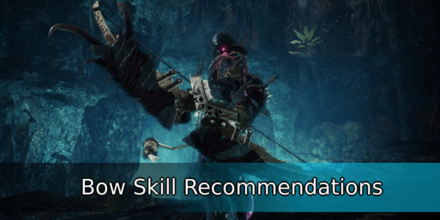 This is a guide about the best skills for Bows. Read on to know which skills to look out for when making a Bow build and why.

Bows are excellent exploiters of monster weak spots. Amplify their damage by investing in Affinity skills such as Critical Eye, Critical Boost, and Weakness Exploit.

Hunters who love using the Bow's Dragon Piercer Attack may consider adding Piercing Shots to their builds. Piercing shots greatly increase the damage of Dragon Piercer at level two and is definitely worth the mention.

Bow Charge Plus is a straight-forward skill that increases the maximum charge level of bows to three. The damage increase might not be as high as the other skills in list but it is still worth mentioning.

Evade Extender is an amazing skill when paired with Bows.

Hunters who are looking for an extra layer of protection may consider using Divine Blessing. This skill reduces incoming damage by 50% from the attack that triggered it. Levels four and five are unlocked via the Divine Blessing Secret Skill.

Bows are the most demanding weapons in terms of stamina consumption as almost all of its moveset relies on a certain amount of stamina to either perform or charge. Hunters who cannot afford to bring Dash Juice with them during hunts are recommended to invest in these Stamina Skills:

Marathon Runner reduces CONTINUOUS stamina depletion by 50% at level three. This affects sprinting and how long hunters can hold their bow's aim while charging.

Stamina Surge increases stamina recovery speed by 30% at level three. This allows hunters to get back into the fight quicker.

Earplugs is a great skill for hunters who find monster roars an issue. This skill offers complete protection from monster roars at level five and is worthy of consideration when making builds.

Register as a member and get all the information you want. (It's free!)
Login
Opinions about an article or post go here.
Opinions about an article or post
We at Game8 thank you for your support.
In order for us to make the best articles possible, share your corrections, opinions, and thoughts about "Best Skills for Bows" with us!
When reporting a problem, please be as specific as possible in providing details such as what conditions the problem occurred under and what kind of effects it had.