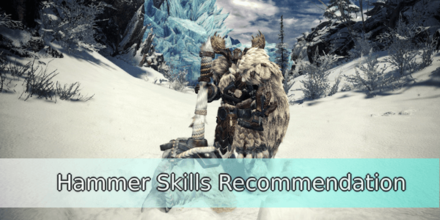 This is a guide about the best skills for Hammers. Read on to know which skills to look out for when making a Hammer build and why.

Hammers in general boast incredibly high base damages. It is recommended that hunters take advantage of this by using these Affinity Skills for a gigantic boost in overall damage.

Weakness Exploit is particularly effective with Hammers as two of the charged Hammer attacks can link to a Clutch Claw attack combo. This makes the Hammer one of the best weapons for tenderizing a monster's hide.

Even though they lack cutting damage for tails, Hammers are efficient knock-out weapons!

The Slugger Skill will take this efficiency to a whole new level by increasing Stun Power by 40% at level three and a whopping 60% at level five. Level four and five are unlocked via the Slugger Secret skill.

Hammers are generally limited by their short range. The areas it can reach (especially when its the monster's head), however, will be subjected to insane amounts of damage due to its ability to perform quick Clutch Claw attacks and precise Hammer swings.

Partbreaker is an excellent skill to pair with the Hammer as it boosts Part Damage by 30% at level three.

Hunters that go all-out on damage may find themselves in situations where they use all of the skills above and still have vacant slots. Attack Up is definitely a great addition in this case!

Divine Blessing is an amazing defensive skill for weapons that cannot block. When activated, Hunters will receive 50% less damage at level three from the attack that triggered it.

Level four and five are unlocked via the Divine Blessing Secret and will increase the damage reduction by 60% as well as a higher chance of activation.

Hammers benefit a lot from the Evasion Extender. This skill greatly increases the distance covered by dodge rolls at level three.

These are useful for not only dodging monster roars, but for relocating to better positions during a hunt as well.

Most uncharged Hammer attacks can bounce of a monster's hide when thick enough. Hunters can use Mind's Eye/Ballistics to ensure that their Hammers keep on swinging no matter the target!

The majority of Hammers in Monster Hunter: World do not have their sharpness gauges maxed out. Handicraft increases a weapon's sharpness gauge by 50 at level five and is definitely a skill to consider when making a Hammer build.

Take note that Handicraft will NOT exceed a weapon's maximum sharpness.

Protective Polish is a great skill to address sharpness issues as well because it applies a protective coating around the weapon after sharpening, ensuring that the hunter's Hammer does not lose sharpness for a set amount of time.

Register as a member and get all the information you want. (It's free!)
Login
Opinions about an article or post go here.
Opinions about an article or post
We at Game8 thank you for your support.
In order for us to make the best articles possible, share your corrections, opinions, and thoughts about "Best Skills for Hammers" with us!
When reporting a problem, please be as specific as possible in providing details such as what conditions the problem occurred under and what kind of effects it had.