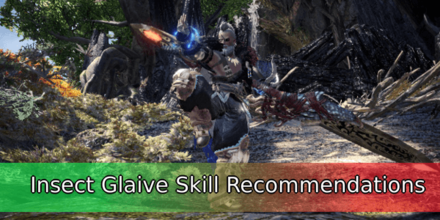 This is a guide about the best skills for Insect Glaives. Read on to know which skills to look out for when making an Insect Glaive build and why.

Insect Glaives excel at exploiting a monster's weak spots. This pinpoint accuracy has made them one of the most methodical hunting weapons in the game.

It is recommended to invest in Affinity Skills such as Critical Eye, Critical Boost, and Weakness Exploit. These skills will drastically boost the Insect Glaive's overall damage.

Insect Glaives are the kings of aerial damage. Airborne increases jump attacks by 30% and is perfect for Insect Glaives.

Hunters can be vulnerable when performing the Insect Glaive's combos - especially in the air. When triggered, Divine Blessing offers a 50% damage reduction at level three from the attack that triggered it. Levels four and five are unlocked via the Divine Blessing Secret.

Evade Extender is a good defensive skill for Insect Glaives because not only does it greatly increase the distance covered by dodge rolls on the ground at level three, it also improves the Insect Glaive's aerial dodges.

Insect Glaive attacks are vulnerable to deflections if a monster's hide is thick enough. Hunters who find this an issue are recommended to include Mind's Eye/Ballistics into their builds.

Speed Sharpening removes three cycles of the sharpening animation at level three and is a good solution for hunters who find rapid sharpness loss an issue.

insect Glaives have the ability to link their aerial combos with clutch claw attacks. The recently added Clutch Claw Boost skill allow Insect Glaives to tenderize monster parts with one attack instead of two. This makes Insect Glaives efficient tenderizers and is definitely worth considering when making builds for it!

Register as a member and get all the information you want. (It's free!)
Login
Opinions about an article or post go here.
Opinions about an article or post
We at Game8 thank you for your support.
In order for us to make the best articles possible, share your corrections, opinions, and thoughts about "Best Skills for Insect Glaives" with us!
When reporting a problem, please be as specific as possible in providing details such as what conditions the problem occurred under and what kind of effects it had.