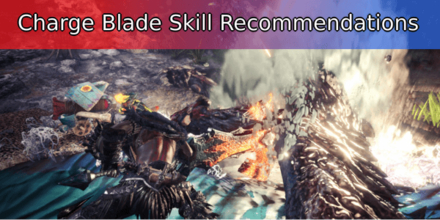 This is a guide about the best skills for Charge Blades. Read on to know which skills to look out for when making a Charge Blade build and why.

This skill is recommended for hunters who want to maximize their Impact Phial damage. Impact Phial attacks (Elemental Discharge, Charged Sword phial attacks, Savage Axe mode attacks) do NOT crit. However, Impact Phials pierce through a monster's hide so boosting the base damage of your Charge Blade is the way to go.

Increasing a charge blade's affinity is always a good thing! Charge Blades with Elemental Phials especially benefit from these skills as their phial attacks can crit as well.

While Impact Phials do NOT crit with their phial attacks, it is still worth investing in these skills to boost the Charge Blade's base damage in both sword and axe forms.

Weakness Exploit is particularly good on Charge Blade builds since Charge Blades can tenderize a monster's hide with one clutch claw attack. The attack ends in axe form as well, giving hunters an opportunity for several Elemental Discharge combos.

This is a key skill for hunters who prefer Impact Phials on their Charge Blades. Artillery boosts an Impact Phial's damage by as much as 30% at level three and 50% at level five (levels four and five are unlocked via the Artillery Secret skill).

This increase in impact phial damage also bolsters the Charge Blade's Knock-Out efficiency, allowing hunters to potentially chain knock-outs depending on the monster.

Charge Blades excel at dishing out damage across a monster's body with its Savage Axe combos and Elemental Discharge Attacks. Partbreaker grants hunters a 30% increase in part damage at level three, giving hunters that extra bit of efficiency whenever farming for a specific item from a monster.

Elemental Phial Charge Blades are considered to be the most devastating weapons in the game when Elemental Attack Up skills are paired Affinity skills (Critical Eye, Critical Boost, Weakness Exploit, etc..).

Charge Blades benefit from the attack and affinity buffs regardless of Phial type.

A staple for any hunter that would rather block than evade attacks, The Guard Skill bolsters a Charge Blade's blocking efficiency. Hunters will receive a massive improvement in impact absorption and a 50% reduction in stamina depletion when blocking attacks at level five.

It is recommended that hunters invest in at least three points in Guard should they decide to incorporate it within their builds.

Another favorite of blocking hunters. The Guard Up Skill allows hunters to block otherwise unblockable attacks from monsters.

This skill is recommended for hunters that like to turn their defense into offense. Offensive Guard increases a hunter's attack by 15% at level three after executing a perfectly-timed guard. The buff only lasts for a few seconds after impact.

Charge Blade users who like to transition into an Elemental Discharge or Savage Axe combo after perfect-blocking will find this skill extremely useful for their playstyle.

This skill caters to Charge Blade users who prefer to utilize the sword form's evasive combat style. Evade extender greatly increases the distanced covered by a hunter's dodge and Charge Blade hops at level three, allowing hunters to maintain the offensive while getting out of harm's way.

This skill does NOT extend the distance covered by the Charge Blade's sliding attack.

Power Prolonger, in essence, provides the same functional benefits as the Focus Skill. Instead of bolstering a hunter's efficiency at filling up Phials, however, Power Prolonger will greatly extend the duration of the Charge Blade's buffs (Charged Sword and Shield) at level three.

This allows hunters to spend their phials offensively for a greater amount of time before recharging their sword and shield.

Capacity Boost is a straight-forward skill that increases the Charge Blade's maximum phial count by one. While this may seem like a minor buff, an extra phial can translate to significant boosts in damage and efficiency in the hands of experienced hunters.

This skill is recommended for hunters that want to start learning how to use a Charge Blade without having to deal with its long sheathing time.

Experienced hunters may also find this skill to be useful in hunts where high mobility is beneficial.

Hunters who prefer using the Savage Axe or Charged Sword forms tend to run into sharpness issues during hunts.

Protective Polish is a great skill to address these issues as it applies a protective coating around the weapon after sharpening, ensuring that hunter's Charge Blade does not lose sharpness for a set amount of time.

Register as a member and get all the information you want. (It's free!)
Login
Opinions about an article or post go here.
Opinions about an article or post
We at Game8 thank you for your support.
In order for us to make the best articles possible, share your corrections, opinions, and thoughts about "Best Skills for Charge Blades" with us!
When reporting a problem, please be as specific as possible in providing details such as what conditions the problem occurred under and what kind of effects it had.