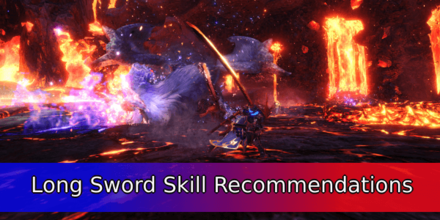 This is a guide about the best skills for Long Swords. Read on to know which skills to look out for when making a Long Sword build and why.

Long Swords are damage-dealing juggernauts that can maintain the offensive better than any other weapon. Any of these Affinity skills will synergize perfectly with the Long Sword's move set and playstyles.

The Long Sword excels at breaking monster parts due to its long reach and wide slashes. Partbreaker increases part damage by 30% at level three and is worth considering when making a build.

Attack Boost may be outperformed by the other skills in this list, but it is always worthy of consideration when met with an abundance of vacant slots.

The Long Sword doesn't need much in terms of defensive skills because of its counteractive and evasive moveset. However, hunters who prefer having an extra layer of protection may consider adding Divine Blessing into their builds.

Divine Blessing offers protection against a monster's attack. Reducing the damage taken from the attack that triggered it by 50% at level three. Levels four and five are unlocked via the Divine Blessing Secret.

Tired of getting roared out of your Spirit Helm Breaker? Earplugs offer completely protection against monster roars at level five.

Being the offensive juggernauts that they are, Long Swords tend to lose sharpness fast. Speed Sharpening removes three cycles of the sharpening animation at level three, making it a great addition to Long Sword builds.

Protective Polish coats the weapon with a protective layer after sharpening, preventing sharpness loss for a certain amount of time. This is another solution to the Long Sword's rapid loss sharpness.

The speed increase for Speed Sheathe in Iai Slash is very minimal and may not be useful except for the most split-second of events.

Register as a member and get all the information you want. (It's free!)
Login
Opinions about an article or post go here.
Opinions about an article or post
We at Game8 thank you for your support.
In order for us to make the best articles possible, share your corrections, opinions, and thoughts about "Best Skills for Long Swords" with us!
When reporting a problem, please be as specific as possible in providing details such as what conditions the problem occurred under and what kind of effects it had.