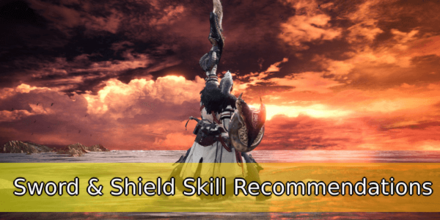 This is a guide about the best skills for Swords and Shields. Read on to know which skills to look out for when making a Sword and Shield build and why.

Sword and Shields benefit from having high affinity - which is why it is recommended to invest in Affinity Skills such as Critical Eye, Critical Boost, and Weakness Exploit to bring the Sword and Shield's overall damage to the next level.

The introduction of the Clutch Claw made the Agitator Skill a community staple when making builds. When active, Agitator grants hunters +20 attack and affinity by 10% at level five. (Levels six and seven are unlocked via the Agitator Secret Skill.)

Hunters can increase their swords and shields' elemental damage even higher by adding these Elemental Attack Skills to their builds.

Swords and Shields excel at targetting a monster's weak spots.

Partbreaker increases Part Damage by 30% at level three and compliments the Sword and Shield very well.

Those who prefer to block with a Sword and Shield might want to consider adding Guard to their builds.

The Guard Skill bolsters a Sword and Shield's blocking efficiency. Hunters will receive a massive improvement in impact absorption and a 50% reduction in stamina depletion when blocking attacks at level five.

It is recommended to invest in at least three levels of Guard when adding it to builds.

Another favorite for blocking hunters. The Guard Up Skill allows hunters to block otherwise unblockable attacks from monsters.

Swords and Shields are more mobile compared to other shielded weapons. Evade Extender greatly increases the distance covered when evading and is definitely worth considering when making Sword and Shield builds.

Sword and Shield attacks can be deflected by monster hides if thick enough. Mind's Eye/Ballistics ensures that attacks can cut through regardless of how thick a hide is!

Protective Polish applies a protective coating to weapons after sharpening, preventing sharpness loss for a certain amount of time.

Speed Sharpening removes three cycles of the sharpening animation at level three and is also another solution to sharpness issues.

Swords and Shields have the unique ability of being able to use items while unsheathed.

Hunters who prefer to apply this towards a more supportive role in groups may invest in Wide-Range.

It is important to note that Palicoes are also affected by Wide-Range's effects.

Speed Eating greatly improves the use speed of consummables. This synergizes well with Wide-Range and is definitely recommended alongside it.

Supportive builds tend to put a heavy strain on a hunter's supplies. Free meal gives you a predetermined chance of using food and drink items without actually consuming them. The activation chances are 25% at level one, 50% at level two, and 75% at level three.

Levels two and three are unlocked via the Free Meal Secret Skill.

Register as a member and get all the information you want. (It's free!)
Login
Opinions about an article or post go here.
Opinions about an article or post
We at Game8 thank you for your support.
In order for us to make the best articles possible, share your corrections, opinions, and thoughts about "Best Skills for Swords and Shields" with us!
When reporting a problem, please be as specific as possible in providing details such as what conditions the problem occurred under and what kind of effects it had.