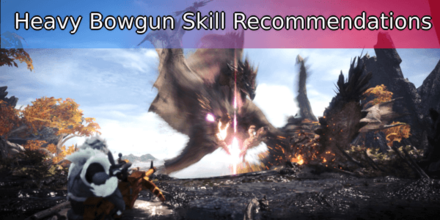 This is a guide about the best skills for Heavy Bowguns. Read on to know which skills to look out for when making a Heavy Bowgun build and why.

Most Heavy Bowgun ammo types benefit from having high affinity. Hunters are advised to invest in Affinity Skills such as Critical Eye, Critical Boost, and Weakness Exploit to see significant improvements to ammo damage when firing from critical range.

Bowguns in general are amazing ranged weapons that can break even the hardest to reach parts of a monster with ease.

Partbreaker increases Part Damage by 30% at level three and will compliment this weapon well.

Spread/Power Shots is recommended for Hunters that prefer to get up close and personal with Spread Ammo. This skill greatly increases the damage of all Spread Ammo at level two

Normal Shots greatly increases the damage of all Normal Ammo at level two and is catered to Hunters who prefer to use Level two and three Normal Ammo.

Want to maximize your Heavy Bowgun's Special Ammo? Special Ammo Boost increases the damage of all Bowgun Special Ammo by 20% at level two and is definitely worth considering.

Sticky Ammo and Cluster Bombs do NOT crit. They do, however, ignore a monster's hide defense.

Sticky Ammo and Cluster Bombs are known for their high KO damage. Slugger increases Stun Power by 40% at level three and is definitely worth adding to Sticky/Cluster builds.

Artillery is the MOST important skill in a Sticky Ammo Hunter's build. Artillery increases the damage of all Sticky Ammo by 30% at level three.

Levels four and five are unlocked via the Artillery Secret Skill.

Unlike Light Bowguns, Heavy Bowguns can be modded with a shield that can block frontal attacks when aiming to compensate for their slow movement when unsheathed. Hunters who only use one shield mod for their Heavy Bowguns may consider adding Guard to their builds.

Guard bolsters a weapon's blocking efficiency, massively reducing the impact of monster attacks and stamina cost of blocking by 50% at level five.

It is recommended that hunters use at least THREE points in Guard when including it into their builds.

Guard Up is a blocker's favorite skill. It allows hunters to block otherwise unblockable attacks from monsters.

Hunters looking for an extra layer of protection on top of shield mods may consider using Divine Blessing. Divine Blessing, when triggered, reduces the incoming damage by 50% at level three from the attack that triggered it.

Levels four and five are unlocked via the Divine Blessing Secret Skill.

Tired of being roared out of your Wyvernheart attack?

Earplugs offer complete protection from monster roars at level five, ensuring that a hunter's Wyvernheart attack remains uninterrupted no matter how loud a monster is!

Heavy Bowguns are notorious for their insanely slow and clunky dodge rolls when unsheathed. Hunters who find this an issue may invest in these Evasion Skills.

Hunters who take issue with their bowgun's magazine sizes may consider investing in Free Elem/Ammo Up. This skill expands the clip size of most ammo types at level three.

Free Elem/Ammo Up is particularly useful for Sticky Ammo and Cluster Bomb builds since their magazine sizes are often small compared to other ammo types.

Razor Sharp/Spare Shot is a special skill that when triggered, refunds the ammo fired by the hunter. This indirectly bolsters a hunter's overall damage per clip as the refund mechanic could potentially allow the hunter to shoot significantly more shots before reloading.

There are currently no jewels that provide these skills. Below is a table of where to acquire them:

Register as a member and get all the information you want. (It's free!)
Login
Opinions about an article or post go here.
Opinions about an article or post
We at Game8 thank you for your support.
In order for us to make the best articles possible, share your corrections, opinions, and thoughts about "Best Skills for Heavy Bowguns" with us!
When reporting a problem, please be as specific as possible in providing details such as what conditions the problem occurred under and what kind of effects it had.