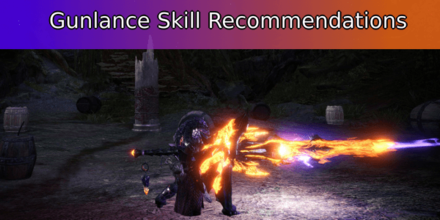 This is a guide about the best skills for Gunlances. Read on to know which skills to look out for when making a Gunlance build and why.

Gunlance Shells and Wyvern's Fire do NOT crit - which is why I recommend Attack Up over the usual Affinity Skills for Gunlances.

The Artillery skill boosts the Gunlance's shell attacks by 30% and reduces Wyvern's Fire's cooldown by 50% at level three (Artillery level four and five are unlocked via the Artillery Secret Skill).

This Skill is a MUST-HAVE for all Gunlances regardless of Shelling Type.

Partbreaker is particularly useful for Gunlances as it boosts Part Damage by 30% at level three.

This direct increase in part damage compliments the Gunlance's efficiency in picking a specific monster part and focusing on it until the part breaks.

Partbreaker damage increase does NOT reflect in floating damage numbers.

The Guard Skill is considered to be the most important skill in any hunter's Gunlance build. The Guard Skill bolsters a Gunlance's blocking efficiency. Hunters will receive a massive improvement in impact absorption and a 50% reduction in stamina depletion when blocking attacks at level five.

A hunter's mobility is severly limited when the Gunlance is unsheathed. This skill ensures that hunters can stand their ground and block attacks in almost every scenario.

It is recommended that hunters invest in at least three points in Guard should they decide to incorporate it within their builds.

Another favorite for blocking hunters. The Guard Up Skill allows hunters to block otherwise unblockable attacks from monsters.

Evade Extender is a skill that greatly increases the evasion distance at level three.

This skill is particularly useful with Gunlances as the increase in it's hopping distance can translate in drastic improvements for both offensive and defensive capablities.

The Offensive Guard Skill increases a hunter's attack by 15% for a few seconds whenever a perfectly-timed block is executed.

This compliments the Gunlance well as Gunlance hunters typically want to be in the thick of any fight.

Focus allows Gunlances to charge their shells 15% faster at level three. This skill is mostly recommended for Gunlance builds that use Wide or Long Shelling Types.

Capacity boost is a straight-forward skill that increases the Gunlance's maximum shell count by one. While this can be incorporated to any Shelling Type, It is particularly effective in Gulances with Normal Shelling Types.

Gunlance Shellings and Wyvern's Fire can pierce a monster's hide when dishing out their damage. The trade-off is that Gunlances tend to lose sharpness faster than any other weapon in the game.

Speed Sharpening is an excellent solution to this problem as it removes three cycles of the sharpening animation at level three.

Register as a member and get all the information you want. (It's free!)
Login
Opinions about an article or post go here.
Opinions about an article or post
We at Game8 thank you for your support.
In order for us to make the best articles possible, share your corrections, opinions, and thoughts about "Best Skills for Gunlances" with us!
When reporting a problem, please be as specific as possible in providing details such as what conditions the problem occurred under and what kind of effects it had.