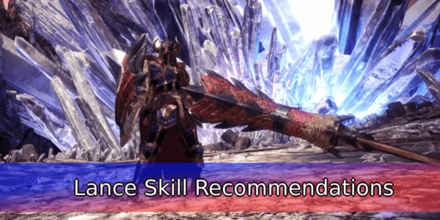 This is a guide about the best skills for Lances. Read on to know which skills to look out for when making a Lance build and why.

Affinity skills are great ways in increasing the overall damage of a weapon.

Weakness Exploit, in particular, pairs very well with the Lance due to its efficiency in abusing a monster's weak spots.

Lances are efficient part-breaking weapons! Partbreaker increases Part Damage by 30% at level three is a perfect compliment to the Lance's accuracy and playstyle.

Attack Boost may be outperformed by the other skills in this list, but it is always worthy of consideration when met with an abundance of vacant slots.

This is the most important skill in a Lance's build. Guard greatly reduces the impact of monster attacks and stamina cost when blocking at level five.

This allows hunters to stand their ground and remain in the thick of the fight in most scenarios.

Undoubtebly a favorite of blocking hunters. The Guard Up Skill allows hunters to block otherwise unblockable attacks from monsters.

This skill is recommended for hunters that like to turn their defense into offense. Offensive Guard increases a hunter's attack by 15% at level three after executing a perfectly-timed guard. The buff only lasts for a few seconds after impact.

This is particularly effective with Lances because they can parry monster attacks with ease.

Evade Extender caters to hunters who want to improve the Lance's hops while unsheathed. This skill greatly increases the distance covered by dodge rolls and Lance hops at level three.

Lance attacks can deflect off a monster's hide when thick enough. Hunters who find this an issue may add Mind's Eye/Ballistics to their builds.

Hunters who have sharpness issues with their Lances can invest in Protective Polish. This skill applies a protective coating around the weapon after sharpening, preventing sharpness loss for a certain amount of time.

Speed Sharpening is another skill to consider when facing sharpness issues with Lances. This skill removes three cycles of the sharpening animation at level three.

Register as a member and get all the information you want. (It's free!)
Login
Opinions about an article or post go here.
Opinions about an article or post
We at Game8 thank you for your support.
In order for us to make the best articles possible, share your corrections, opinions, and thoughts about "Best Skills for Lances" with us!
When reporting a problem, please be as specific as possible in providing details such as what conditions the problem occurred under and what kind of effects it had.