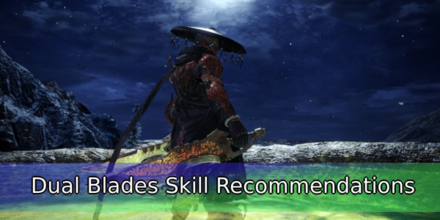 This is a guide about the best skills for Dual Blades. Read on to know which skills to look out for when making Dual Blades builds and why.

Dual Blades are great exploiters of a monster's weak spots, making these Affinity Skills a perfect compliment to its playstyle.

Critical Draw, in particular, increases the affinity of Draw Attacks by 100% at level three. This is useful for hunters who utilize the full Velkhana Divinity set bonus.

Dual Blades are excellent in abusing a monster's elemental weaknesses. Take their damage to the next level by investing in these Elemental Attack Skills!

Dual Blades can deal high damage to weak spots in an incredibly short amount of time.

Partbreaker increases Part Damage by 30% at level three and is definitely worth considering when making Dual Blades builds.

Dual Blades are considered to be the most elusive of all close-range weapons. Compliment its evasive playstyle by investing in these Evasive skills!

It is worth mentioning that these skills also enhance the evasive capabilities of the Dual Blade's slide attacks and dashes during Demon Mode.

Hunters who are looking for an extra layer of protection may consider adding Divine Blessing to their builds.

Divine Blessing, when triggered, reduces damage taken by 50% at level three from the attack that triggered it. Levels four and five are unlocked via the Divine Blessing Secret Skill.

Dual Blades heavily rely on stamina to deal damage and get out of harm's way.

Constitution reduces FIXED stamina depletion by 50% at level five. This means that moves such as evading, clutch claw attacks, and relocating while mounted will spend 50% less stamina when performed.

This covers moves such as sprinting, hanging on with a clutch claw, and bracing while mounted. The biggest beneficiary of this skill, however, is definitely the Dual Blades' Demon Mode ability.

Demon Mode is a special Dual Blades stance that enhances its attacks but continously reduces stamina as long as its active. Hunters who utilize Marathon Runner can stay in fights longer while in Demon Mode before having to back off to regenerate stamina.

The Dual Blades' incredible speed means it is prone to losing sharpness rapidly as well.

Protective Polish coats the weapon with a protective layer after sharpening, preventing sharpness loss for a certain amount of time.

Another solution to sharpness issues, Speed Sharpening removes three cycles of the sharpening animation at level three and is definitely worthy of consideration when making Dual Blades builds.

Register as a member and get all the information you want. (It's free!)
Login
Opinions about an article or post go here.
Opinions about an article or post
We at Game8 thank you for your support.
In order for us to make the best articles possible, share your corrections, opinions, and thoughts about "Best Skills for Dual Blades" with us!
When reporting a problem, please be as specific as possible in providing details such as what conditions the problem occurred under and what kind of effects it had.