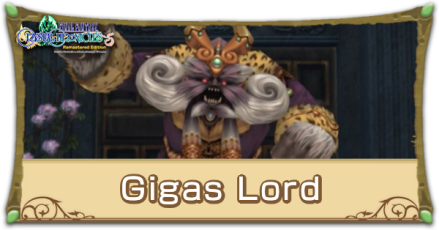 Learn how to beat the boss Gigas Lord in the game Final Fantasy Crystal Chronicles: Remastered Edition (FFCC). This guide has all the details on Gigas Lord's weaknesses and resistances, attack patterns, and what artifacts it drops.

Rush in head-on from the start

It might seem reckless, but the easiest way to handle the battle is just to move directly toward Gigas Lord and attack him with standard attacks. If you wait too long, he will use his Macho Pose move, which will fully restore both his and battle partner Maggie's HP. To avoid this, hit hard from the start and make sure to use Combo Attacks effectively.

Most Bosses' close-range attacks will inflict temporary stun on players when they land. Gigas Lord's attacks do not have this effect, allowing players to stand near him and keep outputting damage as long as they can maintain their own health.

Taking out Maggie is the proper method

As Gigas Lord is unable to use his Macho Pose after Maggie has been knocked out, the “correct” way to win the fight is to first take out Maggie, then finish off Gigas Lord after he can no longer heal himself.

After Maggie has been knocked out, you can switch to simply hammering away at Gigas Lord with no fear.

Gigas Lord's attacks will change in response to the players' distance, and are basically easy to understand. It will not attempt to take distance on its own, so you'll mostly be fighting it from close range. Maggie will continue casting Slowga throughout the fight, and will only attack if players approach her.

When Maggie has been defeated, Gigas Lord will be unable to perform its Macho Pose, removing its ability to heal itself.

Maggie's attacks change in Cycles 2 and 3

From Cycle 2 on, Maggie will begin to cast Stop instead of Slow. It's not easy to power through with threat of Stop lurking, so you'll want to equip an Accessory which provides resistance to Stop.

The Eternal Mail, Eternal Helm, and Accurate Watch all provide resistance to Stop, but are each fairly difficult to obtain. There's no harm in waiting before attempting Moschet Manor in Cycle 2.

In order for us to make the best articles possible, share your corrections, opinions, and thoughts about 「Gigas Lord Weaknesses and How to Beat | Final Fantasy Crystal Chronicles」 with us!