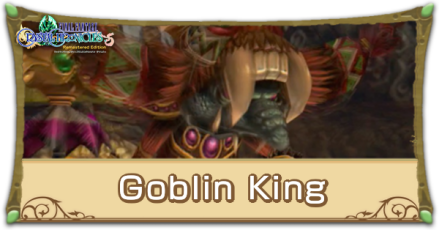 Learn how to beat the boss Goblin King in the game Final Fantasy Crystal Chronicles: Remastered Edition (FFCC). This guide has all the details on Goblin King's weaknesses and resistances, attack patterns, and what artifacts it drops.

Defeat the four Goblins at the start to get the key

At the start of the battle, you'll be behind a locked gate and won't be able to reach the Goblin King. You'll have to fight four standard Goblins first, and after they're gone, you'll get the key to continue through the gate.

Attack from a distance before climbing the stairs

If you're playing a Lilty, you might have no choice, but for other Tribes, stay at the bottom of the stairs and attack the Goblin King from a distance. Its Spells are easy to avoid, so take advantage of the chance to attack in full force before it warps away.

You'll be able to use a similar strategy after continuing up the stairs, but enemy Goblins will appear and start causing a ruckus, preventing you for simply hurling attacks at the Goblin King. From this point, you're better off using regular attacks instead of Magic.

As the Goblin King will change its attack pattern based on the players' positions, try to stay out of range to elicit its use of Magic attacks. When it's charging a Spell, there will be plenty of time to get in attacks, so try to maintain this state throughout the fight.

The Goblin King will warp away randomly, but for the most part, it's easy enough to trap it in the same cycle as the Orc King.

The Goblin King's attacks will change depending on the players' distance. It will also Warp around randomly, but will not walk or dodge attacks. This makes it easy to control your distance from it and take advantage of its different patterns.

Although it begins to use Fira in Cycle 2, this doesn't have a significant effect on how players should handle the battle.

In order for us to make the best articles possible, share your corrections, opinions, and thoughts about 「Goblin King Weaknesses and How to Beat | Final Fantasy Crystal Chronicles」 with us!