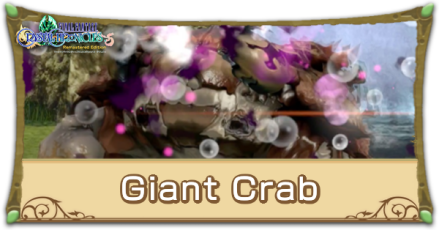 Learn how to beat the boss Giant Crab in the game Final Fantasy Crystal Chronicles: Remastered Edition (FFCC). This guide has all the details on Giant Crab's weaknesses and resistances, attack patterns, and what artifacts it drops.

Wait for the Bubble Attack or Electric Strike to attack

The Giant Crab will alternate between moves with a close range and moves with a longer range. When it moves further away from the players, it will use its Bubble Attack or Electric Strike. This is the best change to get ini an attack, so time it well and hit hard!

Watch out for Thundara after destroying both arms

After dealing significant damage, both of its arms will eventually be destroyed. When this happens, it will start to cast Thundara, which actually has a wider range than it appears to, and lasts for some time dealing multiple hits and heavy damage to anyone caught within it.

As soon as you see the targeting ring for Thundara, move well out of its attack zone!

Its Jump does not count as an attack

After its arms have been destroyed, the Giant Crab will begin to jump around the area. It looks like you would be crushed by its huge frame, but somehow this deals no damage even if you are square in the landing zone. As soon as you see it Jump, move as close as you can to its landing spot to ready an attack.

The Giant Crab will alternate between two attacks at random, one selected from each of the two groups below. The move it chooses within each group will change as its HP decreases.

Attacks change as its HP decreases

As its HP falls, the Giant Crab's arms will be destroyed and it will start to use different moves. It will start to move further away from the players, while using its Bubble Attack and Thundara, or Thundaga on later cycles, repeatedly.

Pattern changes from Cycle 2 on

Starting in Cycle 2, it will begin to use Thundaga after its arms have been destroyed. Thundaga has a huge range, about the same as the diameter of the Crystal Chalice's effect, so use this to estimate how wide of a distance to keep.

Post (0 Comments)
Opinions about an article or post go here.
Opinions about an article or post
We at Game8 thank you for your support.
In order for us to make the best articles possible, share your corrections, opinions, and thoughts about "Giant Crab Weaknesses and How to Beat" with us!
When reporting a problem, please be as specific as possible in providing details such as what conditions the problem occurred under and what kind of effects it had.