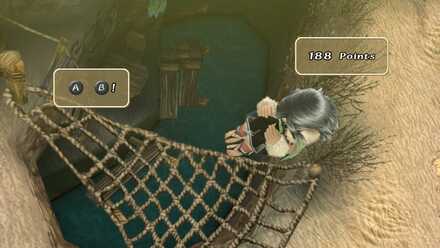 This is a tips and guide page for the minigame Selkie Jump in Final Fantasy Crystal Chronicles: Remastered Edition (FFCC). Read on to know tips on how to get more points, input types, and secrets to easily complete the challenge and rack up points.

Selkie Jump Minigame How to Play

Choose a Selkie as your Character

This minigame cannot be played by non-Selkie characters. You must create a character if you want to play the minigame.

Play with the Selkies 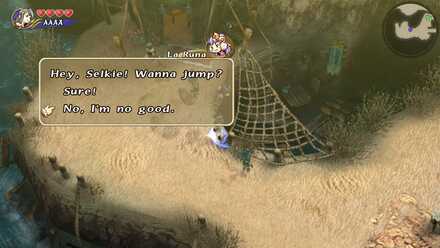 Talk with the two Selkies playing jump on the western side of Leuda to play the game. Accepting the offer will initiate the minigame and it will only stop after you lose.

Input the Command Before Reaching the Rope

The little Selkies will be giving a command from the side. Failing to input the commands (either by misinput or pressing too late) will make you lose the game.

The inputs starts from single inputs only. The number of inputs will start to ramp up in the middle of the game and it can reach 5 inputs after reaching the 300 point mark. All Inputs can lead to few number of inputs as the next command (5 input -> 4 input, etc). while the same works from lower number of inputs to higher with a few exception.

A single input will always have a single input or a double input as its next input and 3 or more inputs will only come from 2 inputs or more. To sum it up, it means that no three input commands or more will appear if your current input is only A or B. 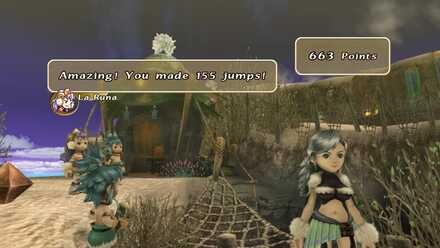 As shown in the input pattern above, each input types has their corresponding points. This can also be doubled by pressing the left or right directional pad while mid-air.

As shown above, there are 4 available rewards from playing the Selkie Jump. The required points for each item are as follows:

So you'll need to jump a lot to get those juicy (or metallic) items.

In order for us to make the best articles possible, share your corrections, opinions, and thoughts about 「Selkie Jump Minigame Walkthrough | Final Fantasy Crystal Chronicles」 with us!