Malboro Weaknesses and How to Beat | Final Fantasy Crystal Chronicles 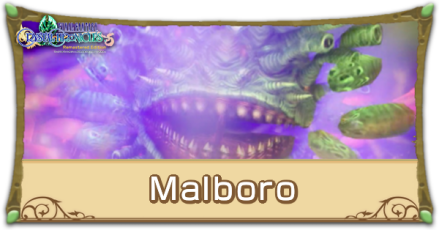 Learn how to beat the boss Malboro in the game Final Fantasy Crystal Chronicles: Remastered Edition (FFCC). This guide has all the details on Malboro's weaknesses and resistances, attack patterns, and what artifacts it drops.

Malboro's attack pattern is rather simple, and doesn't deal so much damage in each hit. It can strike anywhere in the space surrounding itself, so move quickly to avoid its hits while staying close and laying on the damage.

Get rid of the enemies protecting it

The first thing to do is to get rid of the two enemies that will spawn in front of it. Both of them use range-based attacks, so they'll cause trouble when you're attacking Malboro, and will become even more vexing when you've eaten a Slow.

Malboro uses Inhale to pull players in close, then strikes with its tentacles repeatedly. Slow is difficult to avoid after Malboro starts casting it, so it's important to move with care after you've been hit by it.

Pattern changes from Cycle 2 on

Starting in Cycle 2, it will begin to use Blizzaga after its HP has been decreased. Blizzaga has a huge range, about the same as the diameter of the Crystal Chalice's effect, so use this to estimate how wide of a distance to keep.

If you've been hit by Cursera and then suffer a Blizzaga hit, you'll take enormous damage, so when hit by Slowga or Cursera in the second phase of the fight, it's best to simply stay out of range and wait for its effects to wear off.

In order for us to make the best articles possible, share your corrections, opinions, and thoughts about 「Malboro Weaknesses and How to Beat | Final Fantasy Crystal Chronicles」 with us!