Antlion Weaknesses and How to Beat | Final Fantasy Crystal Chronicles 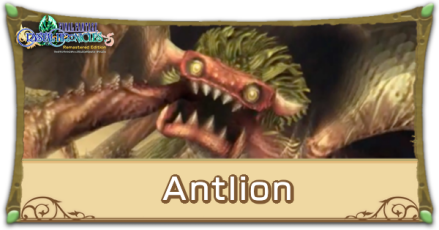 Learn how to beat the boss Antlion in the game Final Fantasy Crystal Chronicles: Remastered Edition (FFCC). This guide has all the details on Antlion's weaknesses and resistances, attack patterns, and what artifacts it drops.

Use Blizzara from a distance

Antlion's close-range attacks deal heavy damage, so keep a safe distance and throw Magic at it from where it can't hit you. It also takes a long time to prepare between each of its ranged attacks, so you will have plenty of time to hit back as long as you can dodge its moves.

When in close-range, try to get behind it

If you're planning on attacking from close-range, you'll need to stay to its side or behind it as much as possible. The attacks it uses in the early part of the fight are not so threatening, but when its HP falls, it will start to use its Leg Smash attack, which has a much wider range.

If you're taken unaware and start to take hits, be sure to move out of the way and heal up sooner rather than later.

Leave plenty of room to evade

Gives the confined space, the battle with Antlion has a somewhat different camera display from others. This can make it hard to tell how much room you have, and you can find yourself cornered against the wall before you know it. Regardless of whether you're close in or far away from the beast, be sure you've got enough space when attempting evasive maneuvers.

Armstrong's attacks will change in response to the players' distance. It will move toward the players consistently, making it difficult to keep a distance. Zig-zag to the left and right, avoiding staying in one spot for too long.

After decreasing its HP to around 70%, it will start to use its Leg Smash attack. This move is far more difficult to avoid than its Mandible Attack, and will force players to stop attacking and take an evasive position earlier on each approach.

In order for us to make the best articles possible, share your corrections, opinions, and thoughts about 「Antlion Weaknesses and How to Beat | Final Fantasy Crystal Chronicles」 with us!