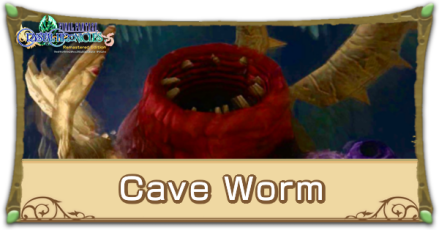 Learn how to beat the boss Cave Worm in the game Final Fantasy Crystal Chronicles: Remastered Edition (FFCC). This guide has all the details on Cave Worm's weaknesses and resistances, attack patterns, and what artifacts it drops.

Electric Jellyfish will appear to assist in the battle, and when they come close, can deal damage and inflict Paralysis. Even if you try to ignore them, they will come after you and cause trouble, so these foes will be a significant nuisance when going in with no plan.

Changing the Crystal Chalice's Element to Wind will grant a resistance to Thunder, nullifying the Paralysis effect completely. Otherwise, Thunder-resisting Equipment will work as well.

Attack while the Cave Worm is in action

When the Cave Worm seems to be inactive, damaging it will enrage it and incite it to counter with its Neck Flail and Slam moves. These attacks are difficult to avoid, but it will almost never use them if not provoked.

Instead, wait for it to use its other attacks like Sand Breath and Inhale, and find a gap to attack, as it will not counterattack at this time. Try to attack Cave Worm only when it is using an attack, keeping a tactical head throughout the battle.

Attacking during Inhale is the safest bet

When the players take distance from Cave Worm, it will use Inhale to draw them back in. Inhale itself deals no damage, while also leaving the Cave Worm vulnerable to attack, making it a prime chance to get in some hits. Lure Cave Worm into using Inhale, then attack while being drawn in.

This strategy can take some time, but when struggling with the battle using other techniques, old slow and steady can pull through.

Cave Worm will counter with Slam and Neck Flail when provoked in its inactivate state. If it uses these attacks, you probably attacked too early, so try to wait longer before striking next time.

It uses Sand Breath with high frequency, an attack with a wide horizontal range. Start moving early to make sure you're well out of range of the attack.

When attacked in an inactive state

Attacks do not change in Cycles 2 and 3

Every time you encounter Cave Worm, its attack patterns will be the same, although its stats will increase in each progressive Cycle.

In order for us to make the best articles possible, share your corrections, opinions, and thoughts about 「Cave Worm Weaknesses and How to Beat | Final Fantasy Crystal Chronicles」 with us!