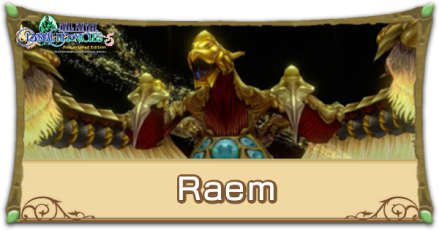 Learn how to beat the boss Raem in the game Final Fantasy Crystal Chronicles: Remastered Edition (FFCC). This guide has all the details on Raem's weaknesses and resistances, attack patterns, and what artifacts it drops.

Look Back on your Memories

Before battling with Raem, you'll first need to survive a long conversation. You'll need to answer five questions about your journey so far, based on the contents of your Diary. However, you won't be able to look them up now, so it's a good idea to check back through your Diary again before the Dungeon to study up. Hope you didn't skip through too many of the cutscenes!

Even if you lose to the Minions who appear, you'll be able to continue the game, but if your Memory Count falls below 10, you'll suffer an automatic Game Over. A regular playthrough will usually leave the player with around 30 memories, so this is a rare case, but be sure to take the quiz section seriously.

Incite it to use Bubbles

When you move far enough away from Raem, it will use its tri-elemental Bubble attack. It will move toward you to and can be intimidating, but instead of running the opposite direction, moving in close to Raem is the best way to dodge it. This will give you room to attack about twice before you move away again and repeat the pattern.

Continue to the Real Final Boss

Once you've defeated Raem, you'll find that the fight has just begun, as the battlefield changes form. Raem's battle style will change greatly as well, so be prepared.

Its Dual-Wing Strike and Laser Beam will not hit when you're close by, so watch out for Tackle in particular.

The Bubbles will follow the player, but if you run away there's no way they will chase you down. It depends on your position, but moving in close to Raem is the best way to avoid them.

After decreasing its HP by 50%, it will start to use it Laser Beam attack. This deals heavy damage and its explosion has a wide range, but as long as you stay close to Raem, you'll be in the clear.

Post (0 Comments)
Opinions about an article or post go here.
Opinions about an article or post
We at Game8 thank you for your support.
In order for us to make the best articles possible, share your corrections, opinions, and thoughts about "Raem Weaknesses and How to Beat | Final Boss Part 1" with us!
When reporting a problem, please be as specific as possible in providing details such as what conditions the problem occurred under and what kind of effects it had.