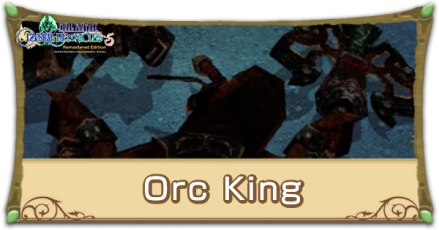 Learn how to beat the boss Orc King in the game Final Fantasy Crystal Chronicles: Remastered Edition (FFCC). This guide has all the details on Orc King's weaknesses and resistances, attack patterns, and what artifacts it drops.

As the Orc King will change its attack pattern based on the players' positions, try to stay out of range to elicit its use of Magic attacks. When it's charging a Spell, there will be plenty of time to get in attacks, so try to maintain this state throughout the fight.

Run away when its fiery aura appears

After bringing it down to 20%, the Orc King will be clad in a fiery aura, and prepare for its Self-Destruct attack. If you go to the edge of the area, you'll be able to survive the Self-Destruct without taking any damage, and win the fight in one swoop.

It's possible to knock it out while it's preparing the Self-Destruct, which takes longer than one might expect to prepare. If you're feeling confident, you can go for the kill, but there's no advantage of doing so, and avoiding the blast is easier.

Alternatively, Defend to Negate the Damage

Holding the Defend Button will allow you to block the Goblin King's Kamikaze attack. This is by far, the easiest way to handle the last part of the fight.

The Orc King changes strategies based on its distance from the players. It rarely approaches on its own, and instead moves away to try to cast magic.

Changes attacks when low on HP

When it reaches 20% of its max health, it will use a self-destructing attack which depleted all of its remaining health. While it's charging this attack, players can attempt to decrease all its health in time, as the Orc King will not fight back. Otherwise, run for the corner and hope you can survive the blast!

Pattern does not change in Cycle 2

Unlike other bosses, the Orc King's battle style will be the same each time you fight him, so you can handle him the same way every time.

In order for us to make the best articles possible, share your corrections, opinions, and thoughts about 「Orc King Weaknesses and How to Beat | Final Fantasy Crystal Chronicles」 with us!