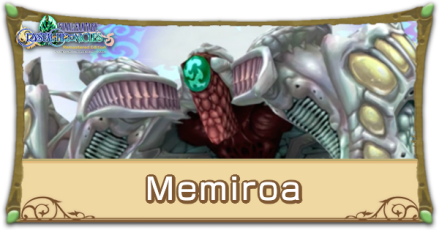 Learn how to beat the final boss, Memiroa in the game Final Fantasy Crystal Chronicles: Remastered Edition (FFCC). This guide has all the details on Memiroa's weaknesses and resistances, attack patterns, and what artifacts it drops.

Destroy its tail, then move on to the body

Memiroa's attack patterns are separated into when its tail is attached and when it is destroyed. First thing, you'll want to focus on attacking and destroying the tail. After the tail is destroyed, its body will come down and become vulnerable, allowing you to deal real damage to it.

After a set period, the tail will be revived, so you'll need to repeat this pattern until it is defeated.

A resistance to Slow comes in handy

Its tail will use the Smoke attack, which will inflict the Slow status. As Memiroa's attacks each pack a substantial punch, having resistance to Slow will reduce your chance of getting overwhelmed.

Use Cure on your family's memories

Memories of your family members will appear around the battlefield. When you cast Cure on them, they will transform into a stone of ??? Magicite. The Magicite will cause a random Spell to be used, but all of them are highly powerful.

Gather the ??? Magicite while attacking the tail, then after the body descends, use the ??? Spell on the body. The barrier effect is extremely useful, but be extra careful not to get hit head-on by one of its Beams at the second the barrier runs out.

The ??? Barrier is a godsend

If you're taking too much damage to dish out consistent attacks of your own, the barrier effect provided by the ??? Magicite will provide a long period where you can focus on attacking without taking any damage at all.

Before Tail is Broken

Its Claw Drop will miss if you are close enough to it.

After Tail is Broken

Both of these attacks deal extremely high damage. If you stand directly in front of it, you won't be hit, but it's safest to wait out the attacks to the side or behind it.

Register as a member and get all the information you want. (It's free!)
Login
Opinions about an article or post go here.
Opinions about an article or post
We at Game8 thank you for your support.
In order for us to make the best articles possible, share your corrections, opinions, and thoughts about "Memiroa Weaknesses and How to Beat | Final Boss Part 2" with us!
When reporting a problem, please be as specific as possible in providing details such as what conditions the problem occurred under and what kind of effects it had.