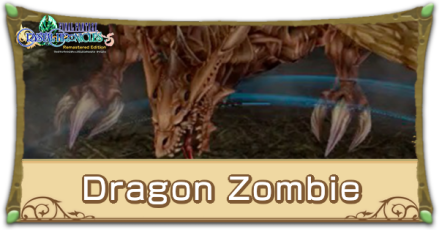 Learn how to beat the boss Dragon Zombie in the game Final Fantasy Crystal Chronicles: Remastered Edition (FFCC). This guide has all the details on Dragon Zombie's weaknesses and resistances, attack patterns, and what artifacts it drops.

As an Undead Monster, all damage dealt to the Dragon Zombie will be reduced to 1 until it has been hit with Holy. It can be difficult to gather the Magicite required to cast Holy within the Dungeon, so if you haven't managed to get it at this point, you're better off repeating the Dungeon from the beginning.

Holy can be created by combining Life Magicite with one of the three main elemental Magicites. Otherwise, multiple players or Mog can Fuse Spells to create Holy.

Set the Chalice's Element to Water or Earth

If the Crystal Chalice is set to Water, it will provide protection from the Freezing effect used by the Stone Sagahins. If it's set to Earth, it will negate the Dragon Zombie's Poison and Petrifying attacks.

A single Equipment or Accessory can work to resist the Ice Element, but it will take two or more to resist both Poison and Petrifying, so Earth is the best overall choice for the Chalice.

Avoid attacks while dishing out Holy

If you have Holy, you've already won. As long as you can continue avoiding its attacks, simply continuing to throw Holy at it will ensure your victory. Fira will work as well, but there's no reason to switch away from Holy once you've started using it.

That said, the Dragon Zombie's attacking power is massive, and depending on your Equipment, one hit will generally cost around 3 hearts of damage. The range of its attacks can be larger than it appears, so keep a wide berth and keep on your toes throughout the battle.

Use Gravity to take out the Stone Sahagins

The biggest threat aside from the Dragon Zombie itself is the foes that spawn alongside him, the Stone Sahagins. These meddlesome creatures are made of Stone, and will also take only 1 damage from any move. However, they have no resistance to Gravity, and one hit is enough to take out half of their health.

Dragon Zombie will secure a position near the middle, and change its attack pattern to match the players' distance. Standard attacks will typically not land, but its Bite will cause it to lunge forward and be vulnerable to regular hits.

The Dragon Zombie's attacks will not change, but an additional Stone Sahagin will appear in Cycle 3. You can handle it in the same way, but be aware of the amount of damage you're taking.

In order for us to make the best articles possible, share your corrections, opinions, and thoughts about 「Dragon Zombie Weaknesses and How to Beat | Final Fantasy Crystal Chronicles」 with us!