Golem Weaknesses and How to Beat | Final Fantasy Crystal Chronicles 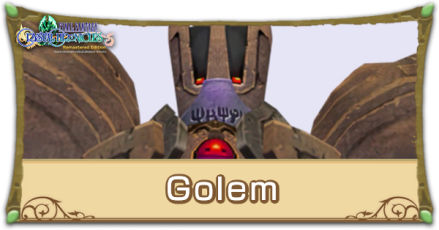 Learn how to beat the boss Golem in the game Final Fantasy Crystal Chronicles: Remastered Edition (FFCC). This guide has all the details on Golem's weaknesses and resistances, attack patterns, and what artifacts it drops.

Golem's attacks are mostly focused on hitting at a close range. Rocket Punch will miss if players are not directly in front of it, while Blue Laser will miss if players stay very close to Golem. The best way to handle its variety of attacks is to stay in close and continue attacking throughout the fight.

Of course, there are some attacks that will land while in this range, but Golem's attacking power is not high enough to cause major problems.

After decreasing its HP by 50%, it will start to use the Red Laser attack, a burning attack with a wide range. It's not so powerful on its own, but its Burning effect will cut your Defense in half, making it much harder to stay on the offensive.

If you've been burned, try to stay out of the fight until the status is healed.

After decreasing its HP by 50%, it will start to use the Red Laser attack, which inflicts the Burning status. Burning will cut your Defense in half, so stay out of the fight or use Clear if you've been hit until you recover from the status.

From Cycle 2 on, Golem will gain access to a new move, Double Lariat. An attack with about the same range as Red Laser, Double Lariat will see Golem spinning its arms around in a circle, and depending on their position, players may be hit twice by the attack.

The attack is not so powerful on its own, but taking the hit wastes time, so it's better to Defend and avoid getting smacked full-on.

Post (0 Comments)
Opinions about an article or post go here.
Opinions about an article or post
We at Game8 thank you for your support.
In order for us to make the best articles possible, share your corrections, opinions, and thoughts about "Golem Weaknesses and How to Beat" with us!
When reporting a problem, please be as specific as possible in providing details such as what conditions the problem occurred under and what kind of effects it had.