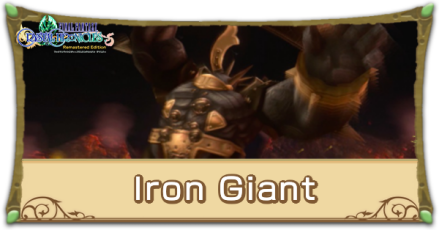 Learn how to beat the boss Iron Giant in the game Final Fantasy Crystal Chronicles: Remastered Edition (FFCC). This guide has all the details on Iron Giant's weaknesses and resistances, attack patterns, and what artifacts it drops.

This Iron Giant ain't no nice guy like in the movies! Keep the following tips in mind to take him down.

Stay close to it and avoid its face

The Iron Giant has few means of attacking to either side, so as long as you stay close to him and avoid his direct line of sight, almost all of his attacks will miss. While he is holding his sword, his Horizontal Sweep attack will hit from his left to his right, so move clockwise around him to see the attack coming and dodge.

That said, each of his attacks pack a punch, so don't get too cocky!

His sides are exposed when his sword is gone

After taking enough damage, the Iron Giant will lose his sword. As before, he'll be vulnerable on the sides, and without his Horizontal Sweep attack, he's all the more ripe for punishment.

Iron Giant's attacks will change in response to the players' distance. It will repeatedly attack throughout the battle, and rarely moves on its own. Watch its movements and find a pattern to avoid its attacks.

As its HP decreases, Iron Giant will go from holding a sword to an unarmed state. Its attacks will change as well, but it won't have a significant effect on the battle strategy.

From Cycle 2 on, Iron Giant will start to use the Gravity Cycle attack. It has a wide range and is difficult to avoid, but Iron Giant doesn't use it frequently. If you accidentally eat a fat fistful, take a breather and heal up before continuing the battle.

In order for us to make the best articles possible, share your corrections, opinions, and thoughts about 「Iron Giant Weaknesses and How to Beat | Final Fantasy Crystal Chronicles」 with us!