Armstrong Weaknesses and How to Beat | Final Fantasy Crystal Chronicles 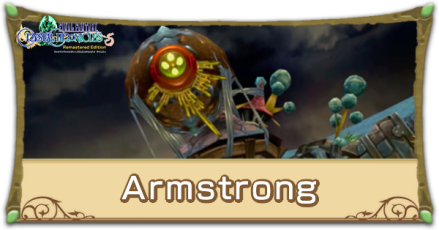 Learn how to beat the boss Armstrong in the game Final Fantasy Crystal Chronicles: Remastered Edition (FFCC). This guide has all the details on Armstrong's weaknesses and resistances, attack patterns, and what artifacts it drops.

Stay close to it and avoid its face

Armstrong has no means of close-range attack except for its “Knock Away” punching attack, as its Mist attack, which inflicts Slow, deals no damage. As long as you stay to its side and avoid its face, you'll be able to easily avoid its punches, so keep in as close as possible and don't stop laying on the damage.

Distance is OK with Firaga

You can pick up several Fire Magicite in Tida. If you've collected enough to use Firaga, you can wait for a chance and then hit it for heavy damage. It takes a long time to charge, but its damage range is extremely wide, allowing you to take out surrounding enemies while dealing damage in one swoop.

Armstrong's attacks will change in response to the players' distance. It will come close and retreat far away, moving around with great hustle and bustle, but that simply makes its movements easier to read.

After decreasing its HP by 50%, it will start to fire bursts from its cannon when the players are at a distance. Its preparation time is short, so it can be difficult to avoid, but as long as you stay moving and force it to turn after you, it will almost surely miss.

From Cycle 2 on, its Cannon Burst will be upgraded with the ability to inflict status effects. In Cycle 2, it will inflict Stop, and in Cycle 3, it will inflict Curse. When Cursed, your Strength, Magic and Defense will all be halved, leaving you completely vulnerable, so stay out of the battle until you can recover.

Post (0 Comments)
Opinions about an article or post go here.
Opinions about an article or post
We at Game8 thank you for your support.
In order for us to make the best articles possible, share your corrections, opinions, and thoughts about "Armstrong Weaknesses and How to Beat" with us!
When reporting a problem, please be as specific as possible in providing details such as what conditions the problem occurred under and what kind of effects it had.