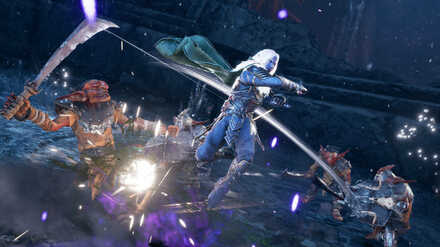 This is a guide on creating the best build for Drizzt Do'Urden, a character in the game Dungeons & Dragons: Dark Alliance. To know more about how you can make the most out of Drizzt Do'Urden, read on!

When you build Drizzt for damage, attribute-wise, Intelligence and Strength give the most number of bonuses when you stack up the points. Drizzt's Defensive Duelist Ability puts 100% of Dexterity as Armor Bonus. With a high Dexterity stat, Drizzt can also maximize his Improved Critical Hit.

Expertise
The Hunter
The Ranger

Drizzt is a quick attacker. The feats were selected because of their Stamina Bonuses. With these feats you can worry less about the amount of Stamina your attacks will cost.

Drizzt may not be a heavy-hitter like Wulfgar, but with these feats he can use his quick attacks to keep up with the amount of damage he can cause. Second Wind will be extremely useful for executing combos in higher Challenge Ratings where enemies will have significantly stronger defenses.

Defensive Duelist is by far Drizzt's most beneficial defensive feat. This is also why Dexterity is placed on the third priority of attributes to upgrade.

This Ability grants Vampiric and Frenzy to Drizzt, If you plan on skipping Short Rests, this is a good alternative to using any Usables.

This Ability inflicts Cursed doubling your damage, it also inflicts Frightened causing the damage of monsters in range of the effect to lessen.

Drizzt has many unblockable attacks that he can activate after successfully Evading from an attack. As early as Level 5, you can unlock 4 unblockable attacks. You can also improve the damage he deals with these attacks by equipping weapons that deal Necrotic Damage and a buffed Intelligence attribute.

Unless you have Defensive Duelist unlocked and a maxed out Dexterity attribute, Drizzt isn't built to take heavy damage. Evade often and use attacks like Aether Slash or Far Conjuration to instantly attack from a distance after evading.

Register as a member and get all the information you want. (It's free!)
Login
Opinions about an article or post go here.
Opinions about an article or post
We at Game8 thank you for your support.
In order for us to make the best articles possible, share your corrections, opinions, and thoughts about "Drizzt Do'Urden Best Builds" with us!
When reporting a problem, please be as specific as possible in providing details such as what conditions the problem occurred under and what kind of effects it had.