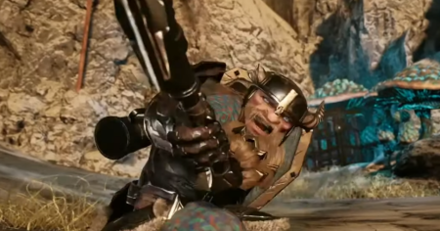 Bruenor's Whirlwind ability is one of his better offensive abilities. You'll want to amplify the Strength of that attack as much as possible while also lowering down it's cooldown with a high Intelligence attribute. As a tank, Bruenor also needs high HP so max out on Contstitution if you can.

This spinning attack when paired with a complete Coldstone Guardian set allows Bruenor to a walking invincible tornado.

This ability can not only deal damage over time to monsters within the range of its AoE, but also grant allies who step inside the AoE an Elemental Fire weapon buff.

If you are playing co-op, much like Catti-brie's Resurrection, use Bruenor's Warsong to boost the morale of your allies while getting a 75% chance to gain Vampiric and Thorns.

Bruenor may not as fast as Drizzt or as damage-dealing as Wulfgar, but he can certainly take a hit. This doesn't mean you should let him get surrounded by enemies.
Use Stomping Quake to break enemy groups and deal with them one by one. Using this also gives you a 25% chance to be Unstoppable.

This is Bruenor's most basic move. Even though it's not as flashy as his other moves, mastering this basic could mean the difference between taking damage or not while attacking.

Register as a member and get all the information you want. (It's free!)
Login
Opinions about an article or post go here.
Opinions about an article or post
We at Game8 thank you for your support.
In order for us to make the best articles possible, share your corrections, opinions, and thoughts about "Bruenor Battlehammer Best Builds" with us!
When reporting a problem, please be as specific as possible in providing details such as what conditions the problem occurred under and what kind of effects it had.