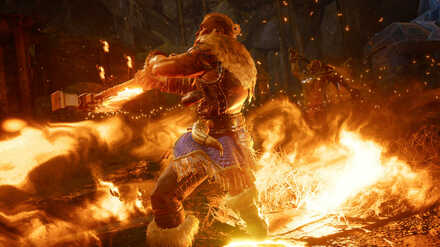 This is a guide on creating the best build for Wulfgar, a character in the game Dungeons & Dragons: Dark Alliance. To know more about how you can make the most out of Wulfgar, read on!

Pack Hunter
The Wolf
The Elk

This ability can be a deciding factor if you are almost down for the count because it scales Wulfgar's damage and armor bonuses based on how many Hit Points he is missing.

Endurance of the Elk

This Ability grants Powerful Strikes to Wulfgar, and Frenzy to himself and his allies. Will come in handy when you play co-op with your friends.

Doing the Fierce + Fierce combo produces an AoE attack in the form of a line. This combo is better suited for weapons that deal added elemental damage because it buffs up the chance to inflict a status condition.

This attack is the best to use against monsters that are closely grouped together. It also deals base fire damage, can inflict Burning condition. Prioritize the Intelligence attribute if you want to fully utilize this attack.

Wulfgar is the slowest of the four companions. In order to close the gap quickly, use Gap Closer to throw yourself into the fray. This attack consumes the permanent Stamina bar. Parry enemy attacks to fill it back again.

Register as a member and get all the information you want. (It's free!)
Login
Opinions about an article or post go here.
Opinions about an article or post
We at Game8 thank you for your support.
In order for us to make the best articles possible, share your corrections, opinions, and thoughts about "Wulfgar Best Builds" with us!
When reporting a problem, please be as specific as possible in providing details such as what conditions the problem occurred under and what kind of effects it had.