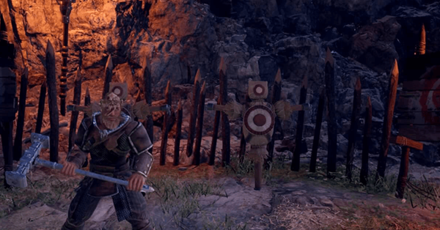 This is a guide on the best Moves you should use for each character in the game Dungeons & Dragons: Dark Alliance. Read on to learn what are the best Moves to use for Cattie-brie, Drizzt, Wulfgar, and Bruenor!

Best Moves to use for Drizzt against a single target like bosses. These moves have either high DPS or multi-hitting properties that can easily melt an enemy's HP down to 0 when used properly.

Well of Darkness is a good AoE move for Drizzt as it can inflict Frightened and drains their stamina in a large radius, making it easier for you and your party to set up afterward.

Gloom Splash has multi-hitting properties that can quickly destroy the armor of an enemy and can be easily spammable if done correctly.

Rising Kick is a move you will be using a lot when using Catti-brie. What makes it powerful is not the initial move, but the move unlocked with it, Vertical Sting Down. If you hit an enemy with this attack, Catti-brie will gain Poison elemental damage to her attacks for a short duration.

Cartwheel Bomber is a strong AOE attack that can deal a ton of damage to enemies in the area, even having a chance to inflict burning if they don't die from the explosion. Lobbed Countdown is another attack with a large AOE, and has a chance to inflict Charmed.

Piercing shot is a powerful attack that will not only go through the enemy's block but will also go through them, dealing damage to any enemy in the way.

Heavy Launcher is a two-hitting attack with a high damage output against a single target while Nail Basher can be spammed pretty easily to deal damage and can inflict Burning to enemies.

Rage Spin allows you to move around to hit as many enemies as you can and inflicts Burning to every enemy hit.

Lunging Axe inflicts stamina destruction, allowing you to follow up with an exhausted execution to deal a lot of damage.

Rolling Boulder staggers enemies and has multi-hitting properties that allow you to easily break enemy armor. Shield Slam also inflicts stamina destruction on top of guard break, making it an overall good move to have against armored enemies.

Register as a member and get all the information you want. (It's free!)
Login
Opinions about an article or post go here.
Opinions about an article or post
We at Game8 thank you for your support.
In order for us to make the best articles possible, share your corrections, opinions, and thoughts about "Best Moves for Each Character" with us!
When reporting a problem, please be as specific as possible in providing details such as what conditions the problem occurred under and what kind of effects it had.