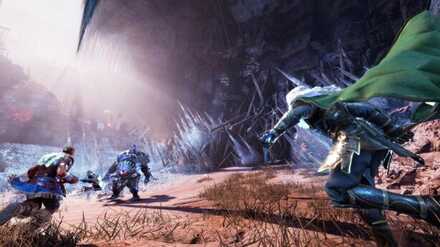 This is a guide on the best Feats you should get for each character in the game Dungeons & Dragons: Dark Alliance for the PS4. Read on to learn what are the best Feats to get for Catti-brie, Drizzt, Wulfgar, and Bruenor!

When it comes to increasing Catti-brie's damage output, focusing on her arrows will be the most effective way to increase her damage the most. Getting Piercing Arrow is a great early game feat that will increase your DPS. Catti-brie's multi arrow attacks benefit most from increasing critical chance and damage in the late game. Getting Precision Shot and Sharpshooter will make Catti-brie's arrows deal high crit damage more often.

Catti-brie is a ranged fighter and will want to be fighting at a distance from the enemies. Increasing her defensive stats will make sure that you will have a better chance when you do end up getting in close quarters with enemies.

When using Catti-brie, you will be using a lot of her moves that require you to spend a lot of stamina. Charging her ranged attack will also drain your stamina. Getting Endurance will help with Catti-brie's reliance on stamina. Catti-brie also has some of the most useful abilities in the game. Her heal ability being one of the best support abilities that will help you and your party survive the toughest fights. Lowering your cooldowns with Keen Mind and Quick Draw will ensure that you will be able to have her abilities available more often.

Focus on Drizzt's DPS and crit

Drizzt's strength comes from the fast attacks that allow him to get in multiple hits in a short period. Lightning Reflexes are a big damage bonus whenever you dodge, while Improved Critical Hit and Precision Attack will have Drizzt's attack crit more often with more damage.

Increasing Drizzt's armor means increasing his survivability. Defensive Duelist is a great Feat that makes putting points into Dexterity even more valuable. Uncanny Dodge will increase armor after evading, something you will be doing a lot of when fighting, further increasing your survivability.

Drizzt uses a lot of stamina

Drizzt can keep going on the attack as long as he has the stamina to spare. This is where Endurance, Riposte, and Second Wind come in. Three of these feats will allow Drizzt to keep up the attack with less downtime waiting for stamina to recharge.

Wulfgar has slower attacks and benefits from physical damage increase. The Charger is a big damage buff with its only requirement is you have to run for a bit first. Brutal Strikes is another feat that will increase your damage by increasing your armor penetration, weakening the defense of any of the enemies you come across. Reckless Abandon is one of the greatest physical damage increase feats that will make your Ultimate even stronger.

Wulfgar is a melee-type character that deals a lot of damage but can be a bit slow. Focusing on his survivability will make up for the lack of his speed. His Blessings of Tempus is one of the best defensive feats as it will make putting points into Strength not only increase his damage but also increase his Elemental Resistance. Hardy and Danger Sense are Feats that make Wulfgar harder to kill.

Keen Mind is an all-around Feat that will always help in any situation with its cooldown reduction. While Fury of Tempus is a great Feat that helps with survivability as long as Wulfgar is dishing out damage. Lastly, Relentless Rage will increase the length of Wulfgar's Ultimate, giving it more impact when available.

Being the tank of the party, Bruenor will have the most defensive options, but it does not mean he can't be offensive either. With Battle Master and Grudge Bearer, after blocking or parrying, Bruenor will receive an increase in his damage. These Feats makes Breunor's defense his offense too,

Bruenor has one of the best armor bonus Feats with Heavy Armor Master, making him hard to kill and allow him to fulfill his role as the tank of the party. With Blessings of the All Father Feat making Bruenor even tankier when putting points into Constitution. Getting these Feats and the other available defensive Feats will make Bruenor borderline unkillable!

Support Feats for himself and his party

The support Feats recommended here will help him and his party. More stamina is always good so Endurance is an obvious choice. One way of Bruenor fulfilling his tank role is through his abilities, and lowering the cooldowns with Keen Mind will help keep the downtime of his abilities as low as possible. Finally, Inspiring Leader is a great Feat that gives a buff to himself and the rest of the party!

Register as a member and get all the information you want. (It's free!)
Login
Opinions about an article or post go here.
Opinions about an article or post
We at Game8 thank you for your support.
In order for us to make the best articles possible, share your corrections, opinions, and thoughts about "Best Feats for Each Character" with us!
When reporting a problem, please be as specific as possible in providing details such as what conditions the problem occurred under and what kind of effects it had.