This is a guide to finding Shroomish in New Pokemon Snap (Pokemon Snap 2) for the Nintendo Switch. Read on to find out if Gyarados can be found somewhere in the game and about its potential inclusion in future DLC.

Where to Find Gyarados

Currently does not appear in New Pokemon Snap! 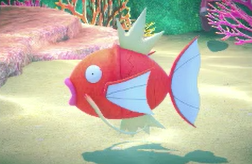 Though Magikarp, the pre-evolved form of Gyarados, can be found all around the Lental Region, Gyarados itself was nowhere to be found even upon completing the Photodex, and there is currently no way to make Pokemon evolve in New Pokemon Snap, which meant that this mainstay Pokemon was sadly absent from New Pokemon Snap.

Due to the fact that Gyarados is a bit of a fan favorite, and evolutions were mysteriously absent in New Pokemon Snap, despite being a big part of the original, we suspect that we may have a chance to see the water serpentine if they are added in through DLC later on. However as of now, there is no confirmation as to whether Gyarados or any other new Pokemon are planned to be added to the game, so it is safe to say that Gyarados is not in the game at this time.

Will There Be DLC?

Register as a member and get all the information you want. (It's free!)
Login
Opinions about an article or post go here.
Opinions about an article or post
We at Game8 thank you for your support.
In order for us to make the best articles possible, share your corrections, opinions, and thoughts about "Is Gyarados in New Pokemon Snap?" with us!
When reporting a problem, please be as specific as possible in providing details such as what conditions the problem occurred under and what kind of effects it had.