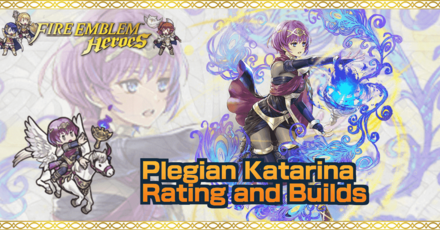 This is a ranking page for the hero Katarina - Torchlit Wanderer from the game Fire Emblem Heroes (FEH). Read on to learn the best IVs (Individual Values), best builds (Inherit Skill), weapon refinement, stats at Lv 40, and more for Plegian Katarina.

The best IVs for Plegian Katarina are +Spd and -Def. A higher Spd stat allows Katarina to get a ton of follow-up attacks on her foes. More importantly, it will also protect her from hostile follow-up attacks. Her Def is very low and is of less importance as she is mainly an offensive unit so it is safe to take as a bane.

We recommend a +Spd IV when merging Plegian Katarina to 10. It is best to aim for follow-up attacks to increase her offensive ability as her Atk combined with her debuffs is already high. If you prefer relying on skills to increase Katarina's Spd, you can go for a +Atk IV instead.

This budget build simply adds Smite and a Chill Spd 3 Sacred Seal. Smite is for making sure allied units are away from Plegian Katarina. It will be useful in compact maps that force units to be very close to one another. Chill Spd will allow her to score more follow-up attacks on foes. Take note that the debuff of Chill Spd will be doubled by Fell Flambeau.

Plegian Katarina's weapon cannot currently be refined. This section will be updated if it becomes refineable in the future!

Plegian Katarina is a ranged magic attacker (range = 2). Therefore, when not accounting for the Weapon Triangle, the amount of damage she deals will be equivalent to his Atk minus the foe's Res stat.

In addition to the effects of Atk/Spd Solo 4 which grants +7 Atk/Spd, Fell Flambeau inflicts -5 Atk/Spd/Def/Res + doubles any current penalty of a foe when Katarina is not adjacent to any unit on the field! This is effectively a minimum of +12 Atk/Spd +5 Def/Res buff when she is solo on the field. Chill Def/Res 2, and Atk/Res Rein 3's debuffs work with Fell Flambeau's effects so debuff away!

Make sure to pay attention to Plegian Katarina's positioning in relation to her allies to make the most out of her kit as losing out on that massive power boost may lead her to be very inefficient.

Chill Def/Res 2 inflicts -5 Def/Res to the unit with the highest Def+Res in the enemy team. This makes Plegian Katarina a great unit to fight against powerful, high defensive stat units such as Halloween Myrrh and Spring Idunn. Another perk of Chill Def/Res 2 is that it affects them regardless of Katarina's position on the map making it easy for Katarina's teammates to take advantage of it as well.

However, it only affects them until their next action, so the penalty wears off if they are granted another action by support units. The penalty will be re-applied to them the next turn, though.

Atk/Res inflicted onto a wide area

Plegian Katarina's C skill, Atk/Res Rein 3 inflicts -4 Atk/Res on foes within 2 spaces during combat. It helps both Plegian Katarina and allies as the range is modest and it affects enemies even if Katarina is not directly part of combat. Katarina's flying movement makes it easy to position her in effectively utilizing this skill. It is an in-combat buff which makes it easy to stack with other debuffs such as Atk Ploy 3. 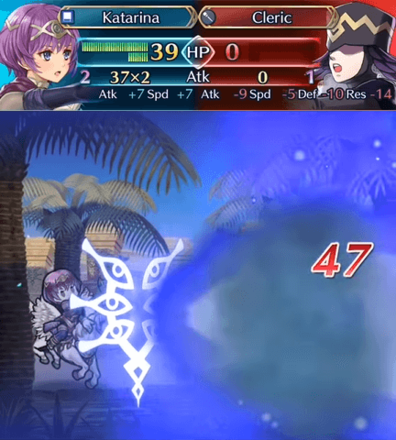 Plegian Kataina cripples the Res stat of the enemy Cleric with her skills and finished her off with an attack.

As a flying unit, Plegian Katarina takes 1.5x damage from bows and weapons effective on flying units. Be sure to keep them out of the range of archers and leave them to other units. To make things worse for her, her Def stat is very low so a shot from a powerful bow unit is fatal!

Should you Unlock Potential for Plegian Katarina?

Katarina - Torchlit Wanderer Only Appears as a 5 Star Hero!

Plegian Katarina as a Source Hero

Plegian Katarina can be used to inherit Chill Def/Res 2 or Atk/Res Rein 3. However, Plegian Katarina is a very versatile special hero that can provide lots of utility and debuffs for your lineups. Please think carefully before fodderring her off.

How to Get Plegian Katarina / Illustrations / Voice Actor / Quotes

How to Get Plegian Katarina

Plegian Katarina is a limited time Hero who can be pulled from a Special Heroes Summoning Event. They do not appear in regular summons.

Register as a member and get all the information you want. (It's free!)
Login
Opinions about an article or post go here.
Opinions about an article or post
We at Game8 thank you for your support.
In order for us to make the best articles possible, share your corrections, opinions, and thoughts about "Plegian Katarina Builds and Best IVs" with us!
When reporting a problem, please be as specific as possible in providing details such as what conditions the problem occurred under and what kind of effects it had.