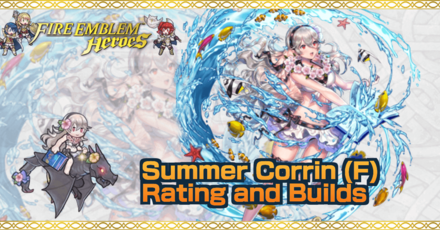 This is a ranking page for the hero Corrin - Novice Vacationer from the game Fire Emblem Heroes (FEH). Read on to learn the best IVs (Individual Values), best builds (Inherit Skill), weapon refinement, stats at Lv 40, and more for Summer Corrin (F).

The best IVs for Summer Corrin (F) are +Spd and -Def. A higher Spd stat allows Summer Corrin (F) to prevent follow-up attacks and help her make follow-up attacks on her own. Her Spd stat can reach 37 Spd through a +Spd IV. This boosts both her offensive and survivability capabilities. Her Def is of less importance and she can afford taking a bane in this stat so it is safe to take as a bane.

We recommend a +Spd IV when merging Summer Corrin (F) to 10. With a +Spd IV, Corrin's Spd stat will reach 41 with 10 merges, which makes it even easier to prevent follow-up attacks from enemies and allows Corrin to get more follow-up attacks on her own.

This skill set is recommended for a flier party. The power of Blárblade+ is amplified with flier-exclusive buffs, giving her amazing offensive capability. Her Spd stat will be at 40, so giving her Desperation will further the amount of damage she can deal out in combat.

This is a standard Adept-Raven build. S!Corrin will be very strong against red and colorless units with this build. As a flying unit, Corrin cannot inherit Bowbreaker, so watch out for foes with strong cows like Brave Bow, etc.

Summer Corrin (F)'s weapon cannot currently be refined. This section will be updated if it becomes refineable in the future!

Summer Corrin (F) is a ranged magic attacker (range = 2). Therefore, when not accounting for the Weapon Triangle, the amount of damage she deals will be equivalent to her Atk minus the foe's Res stat.

Summer Corrin (F) is one of the few flying tome users. Because of this, she can fill specific niches in your team. Due to her mixed supportive and offensive qualities, she can make for a flexible all-around unit in flying-centric teams.

Swift Strike boosts Spd/Res by +4 whenever Summer Corrin (F) initiates attacks. This makes her a great matchup for fast magical attackers, as it makes it unlikely for them to score follow-up attacks and reduces the damage of their counterattacks.

Summer Corrin (F) has access to Fortify Fliers which grants +6 Def/Res to allied flying units. This makes her a good canditate for a support unit in an all-flying team.

Summer Corrin (F) has a somewhat low Atk stat of 43. For her to take out foes consistently, you should buff her Atk and Spd. Her Spd is slightly above average so it is not troublesome to try and get to a range that lets her perform follow-up attacks consistently.

As a flying unit, Summer Corrin (F) takes 1.5x damage from bows and weapons effective on flying units. Be sure to keep her out of the range of archers and leave them to other units.
Heroes with Effective Skills

Should you Unlock Potential for Summer Corrin (F)?

Corrin - Novice Vacationer Only Appears as a 5 Star Hero!

Summer Corrin (F) does not posess any skills that are worth inherting onto another unit. Thus, we recommend training and building her instead. In the event that you get multiple copies of Summer Corrin (F), you should just create a merged unit using the one with the best IVs.

How to Get Summer Corrin (F) / Illustrations / Voice Actor / Quotes

How to Get Summer Corrin (F)

Summer Corrin (F) is a limited time Hero who can be pulled from a Special Heroes Summoning Event. They do not appear in regular summons.

Register as a member and get all the information you want. (It's free!)
Login
Opinions about an article or post go here.
Opinions about an article or post
We at Game8 thank you for your support.
In order for us to make the best articles possible, share your corrections, opinions, and thoughts about "Summer Corrin (F) Builds and Best IVs" with us!
When reporting a problem, please be as specific as possible in providing details such as what conditions the problem occurred under and what kind of effects it had.