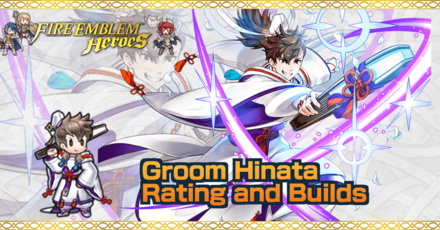 This is a ranking page for the hero Hinata - Samurai Groom from the game Fire Emblem Heroes (FEH). Read on to learn the best IVs (Individual Values), best builds (Inherit Skill), weapon refinement, stats at Lv 40, and more for Groom Hinata.

As a hero obtainable only through Tempest Trials, Groom Hinata will always have neutral IVs by default. The only way to access IVs for this unit is through using Trait Fruits.

The best IVs for Groom Hinata are +Atk and -Res. His Spd is very low and it cannot be relied upon for follow-up attacks so to effectively increase his damage, it is best to take a +Atk IV. His Res is very low and is of less importance so it is safe to take it as a bane.

We recommend a +Atk IV when merging Groom Hinata to 10. This is for the same reasons as above. With this IV, he reaches 59 Atk at max merges if you include his weapon Mt so Hinata can take out a wide range of units in one hit.

This is a budget build for Groom Hinata with minimal Skill Inheritance. Renewal 3 gives Hinata sustain, while Quick Riposte 3 gives him a guaranteed follow-up attack.

This is a high investment build for Groom Hinata using Distant Counter. Rouse Atk/Def 3 will activate the effects of Huge Fan+ and Noontime will give him sustain. Lull Atk/Def 3 will soften units up for his attack, while Quick Riposte 3 will give him a guaranteed follow-up attack

Note: Groom Hinata's stats will always have no IVs.

Groom Hinata is a close physical attacker (range = 1). Therefore, when not accounting for the Weapon Triangle, the amount of damage he deals will be equivalent to his Atk minus the foe's Def stat.

Hinata's weapon, Huge Fan+, grants Atk/Def+4 when he has an active buff and Special Cooldown +1. This effect increases Hinata's offense and defense, and speeds up his special trigger.

Atk/Def Bond 3 increases Hinata's Atk and Def by +5 if he is adjacent to an ally. Since it is an in-combat buff, it stacks with other combat buffs, so it is good to pair with units that have skills like Atk Tactic or Spur Def.

With Close Guard, nearby allies gain Def/Res+4 in combat with close ranged attackers. This is a versatile skill that allows Hinata to provide support simply by being near his allies.

G!Hinata has low Spd and Res, so much so that it is very easy for him to get one-shotted by magic attackers. Be mindful of his positioning, and make sure he stays away from magic attackers.

Groom Hinata as a Source Hero

Groom Hinata can be used to inherit the skill Atk/Spd Bond 3. However, Groom Hinata can only be obtained as a reward from Tempest Trials. This means that the number of Groom Hinatas you can get are limited. Keep this in mind before fodderring him off.

How to Get Groom Hinata / Illustrations / Voice Actor / Quotes

How to Get Groom Hinata

Groom Hinata is a limited time Hero who can be obtained as a reward for your score in the Tempest Trials. They do not appear in regular summons. After the event has ended, they can be obtained by using Heroic Grails.

Register as a member and get all the information you want. (It's free!)
Login
Opinions about an article or post go here.
Opinions about an article or post
We at Game8 thank you for your support.
In order for us to make the best articles possible, share your corrections, opinions, and thoughts about "Groom Hinata Builds and Best IVs" with us!
When reporting a problem, please be as specific as possible in providing details such as what conditions the problem occurred under and what kind of effects it had.