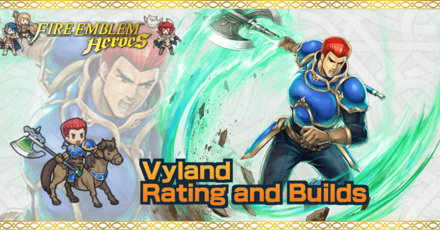 This is a ranking page for the hero Vyland - Coyote's Justice from the game Fire Emblem Heroes (FEH). Read on to learn the best IVs (Individual Values), best builds (Inherit Skill), weapon refinement, stats at Lv 40, and more for Vyland.

Vyland's best IVs are [red]+Atk and -Res/red]. +Atk is a Superboon and boosts his already high Atk stat even further, allowing him to deal more damage per attack. His Res is a dump stat and boosting it will not change most of his matchups, thus it is safe to take as a bane.

If you want to build a +10 merged Vyland, we recommend a +Atk IV. Maximizing his Atk ensures that he deals the most damage possible.

This budget build also uses Vyland as a physical tank, but with more affordable skills. Quick Riposte ensures he makes a follow-up attack on enemy phase.

Vyland is a close-range physical attacker. When the effects of the Weapon Triangle are not taken into account, the damage he deals will be equal to his Atk minus the foes's Def stat.

The debuffs of Unbound Axe+ can be seen above.

Unbound Axe+ is a good inheritable weapon that Vyland brings to the game.

It applies an Atk/Def-5 debuff to the foe and neutralizes foe's bonuses to Atk and Def during combat if Vyland is not adjacent to an ally.

Vyland's HP, Atk, and Def stats are all quite high, especially for a free unit.

This stat distribution works well with his base kit, letting him fulfill his role as a physical tank unit!

Vyland's Res stat is very low, coming in at base 19. He'll be relying purely on his high HP stat to survive magical attacks.

Make sure you keep him away from foes that apply magical damage, such as tomes, staves and dragonstones!

Vyland simply lacks the unique skills necessary to differentiate himself from pretty much every other lance cavalry unit out there.

Use him if he is one of your favorite units, or if he becomes one of your merge projects. Just keep in mind that there are a handful of units that perform his job better due to their various unique skills.

Vyland takes 1.5x damage from cavalry-effective weapons like Ridersbane+ or a Wolf weapon like Keen Rauðrwolf+, and one blow from this type of weapon is sure to take him down. Make sure you know what weapons you are up against before hopping too far into the line of battle!

Vyland as a Source Hero

Vyland comes with Atk/Def Push 3 and Unbound Axe+ as notable skills for inheritance.

Unbound Axe+ is unique to him, but Atk/Def Push 3 is valuable fodder as well for pre-inheritance of the more premium Atk/Def Push 4 from other units.

How to Get Vyland / Illustrations / Voice Actor / Quotes

Vyland is a Hero who can be pulled from any summon.

Register as a member and get all the information you want. (It's free!)
Login
Opinions about an article or post go here.
Opinions about an article or post
We at Game8 thank you for your support.
In order for us to make the best articles possible, share your corrections, opinions, and thoughts about "Vyland Builds and Best IVs" with us!
When reporting a problem, please be as specific as possible in providing details such as what conditions the problem occurred under and what kind of effects it had.